In their previous meeting, the Tigers won by eight wickets, chasing down 138 in 12.3 overs.

Khulna Tigers started the Bangabandhu BPL 2019-20 with three thumping victories on the trot. However, Mushfiqur Rahim and Co slumped to defeats in their last two games against Sylhet Thunder and Rajshahi Royals. Despite the losses, the Tigers are one of the favourites to qualify for the top four. The Tigers are currently placed fourth on the points table at a net run rate of +0.316.

The Tigers are next set to lock horns with Rangpur Rangers in the second of Friday’s doubleheader at the Sher-e-Bangla National Stadium. In their last meeting, the Tigers decimated the Rangers by eight wickets, chasing down 138 in 12.3 overs. The Rangers are the cellar dwellers, but are high on confidence. The same is after they defeated table-toppers Chattogram Challengers by six wickets.

The pitch in Dhaka has been an excellent one for batting. But the bowlers also have had their say. Out of the eight matches in the first leg of the BPL, the chasing teams won five matches. The conditions will be pleasant for playing cricket. The temperature will be around 16 degrees Celsius with the humidity in the 80s. Dew is also likely to play a major part in the second half of the game.

The Tigers have depended heavily on Rilee Rossouw, who has 259 runs at an incredible average of 86.33. Mushfiqur Rahim has 154 runs at 51.33. It’s high time that the duo gets support from the rest of the batters. Rahmanullah Gurbaz has 98 runs and after the 19-ball 50, he has been inconsistent.

The Tigers have used Mehidy Hasan Miraz, Saif Hassan and Najmul Hossain Shanto as Gurbaz’s opening partner. The opening riddle is yet to be solved. Shahidul Islam has six wickets and is their leading wicket-taker. Robbie Frylinck has played a key role, taking five wickets and scoring 89 runs.

The Rangers batting isn’t a settled lot either. Mohammad Naim has 156 runs at an average of 31.20. But the batting hasn’t let the southpaw enough support. Lewis Gregory may get a promotion after his career-best 76* versus the Challengers. Gregory has 130 runs at a decent strike-rate of 156.62.

Cameron Delport hasn’t had a great outing either, getting out on single-digit scores. Gregory and Mustafizur Rahman have six wickets each. But apart from the duo, there isn’t much to talk about the Rangers’ batting. Fazle Mahmud was a positive in the previous game after scoring an unbeaten 38. 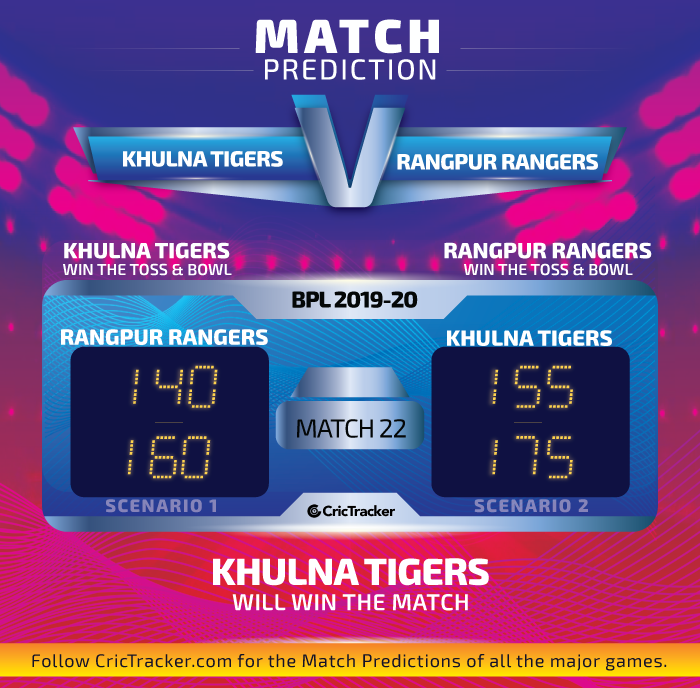