The Sylhet Thunder lost to the Khulna Tigers by eight wickets to find themselves in trouble in the BPL 2019-20. Placed sixth in the table, their fate isn’t completely on their hands. For the Thunder to make the playoffs, they have to win their remaining three matches and also hope for a few other results to go their way. Mosaddek Hossain’s men are next set to play the Rangpur Rangers in Mirpur.

It’s the first time the teams will be locking horns and both of them need a win to stay alive. The Rangers are the cellar dwellers of the championship with a dismal net run rate of -1.935. They have used three skippers thus far- Mohammad Nabi, Tom Abell and Shane Watson. It depicts their travails in the BPL. In their previous game, Mushfiqur Rahim’s Tigers slapped them with a 52-run defeat.

The pitch at the Sher-e-Bangla National Stadium was a tad tricky on Friday’s first match. But the deck has improved ever since. Run-scoring hasn’t been all that tough and bowlers have had to work out of their skins. Teams have opted to chase most times and it shouldn’t be any different even next time around. The conditions will be cloudy with the temperature around the 23 degrees Celsius mark.

The Rangers’ batting has been horrendous, to say the least. Mohammad Naim, who started with a few impressive knocks, has lost rhythm as well. Naim remains as their leading run-scorer with 176 runs at 29.33. Lewis Gregory has threatened, but he has gotten minimum support from the others.

Gregory has a strike-rate of 150.45 with a top score of an unbeaten 76. In the bowling department, Mustafizur Rahman had a decent night against the Tigers, picking three early wickets. Gregory too has done well, getting eight wickets. Nabi has faltered with the bat, but has an economy of 6.61.

Andre Fletcher and Johnson Charles will hold the key in the Thunder’s batting. Even as Fletcher has 188 runs, Charles has notched 253 runs, striking at 174.48. Sherfane Rutherford has strained to find his timing, yet has a strike-rate of 133.33. Rubel may get another chance after his debut last time.

Mohammad Mithun and Mosaddek have 179 and 175 runs respectively. Their role will be key as well. Ebadot Hossain and Krishmar Santokie have seven wickets each. Both have impressive economy rates of 7.24 and 8.01 respectively. The duo needs support from the other bowlers.

The prediction is for Sylhet Thunder to win the match. 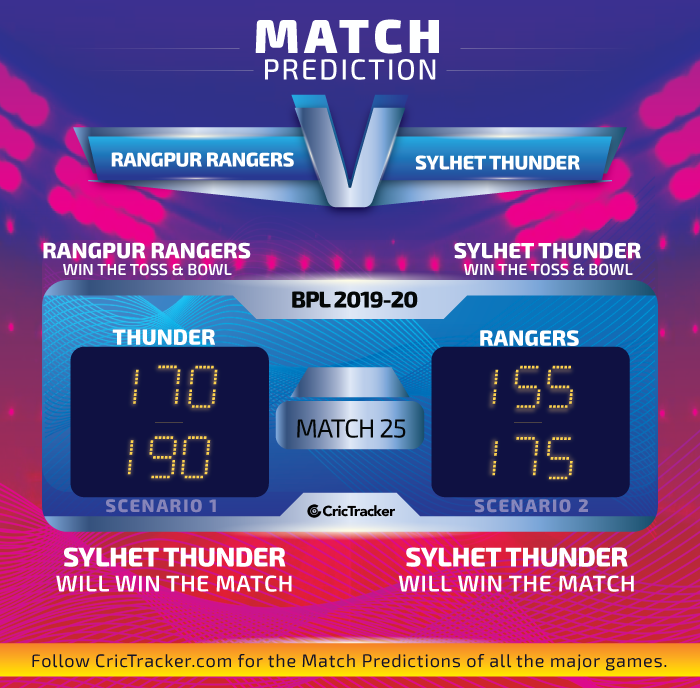