Dawid Malan has re-joined the Warriors after attending his ill wife.

Having lost 10 out of their 11 matches, Sylhet Thunder are playing for nothing, but pride in the 2019-20 edition of the BPL. Albeit they have showed fight in the last few games, victory has continued to evade them. Mosaddek Hossain’s injury hasn’t helped their cause either. The Thunder are next scheduled to cross swords with Cumilla Warriors in the first of Tuesday’s doubleheader in Mirpur.

In their previous meeting, the Warriors edged the Thunder out in a Super Over clash in Sylhet. As far as the Warriors are concerned, they are hanging perilously at number five in the points table with eight points from nine encounters. A victory will help them draw level with Khulna Tigers, who have 10 points from nine matches. A loss could make their last two robin matches must win affairs.

Out of the 16 matches played thus far in Dhaka, nine have been won by the chasing teams. The pitches in those games provided a balance between bat and ball. There haven’t been overly high-scoring affairs and bowlers have had their say. There are no forecasts of rain. The conditions will be mostly sunny with the temperature around the 23 degrees Celsius mark. The humidity will be in the 40s.

Dawid Malan has re-joined the Warriors after attending his ill wife in England. The southpaw is currently the leading run-scorer of this BPL with 377 runs at an average of 62.83. Upul Tharanga scored 45 runs in his very first match and he along with Malan can form a dangerous opening duo.

Soumya Sarkar has 246 runs and his role in the middle-order will be key. The stand-in skipper also has 11 wickets to his name. Mujeeb Ur Rahman and Al-Amin Hossain, Sunzamul Islam have played key roles as well. David Wiese has gone for a few though. Sabbir Rahman isn’t in the best of form.

The Thunder’s batting is yet to put up a collective effort. Andre Fletcher has lost momentum in his batting. Johnson Charles has 270 runs, striking in excess of 160, but even he has floundered big time of late. Sherfane Rutherford hasn’t converted his starts after threatening to play the long inning.

Rutherford has impressed with the ball, having picked six wickets at an economy of 7.88. Mohammad Mithun has been their standout batter with 331 runs with a couple of fifties. In the bowling department, Ebadot Hossain has shouldered chunk of the responsibility with 13 wickets.

The prediction is for Cumilla Warriors to win the match. 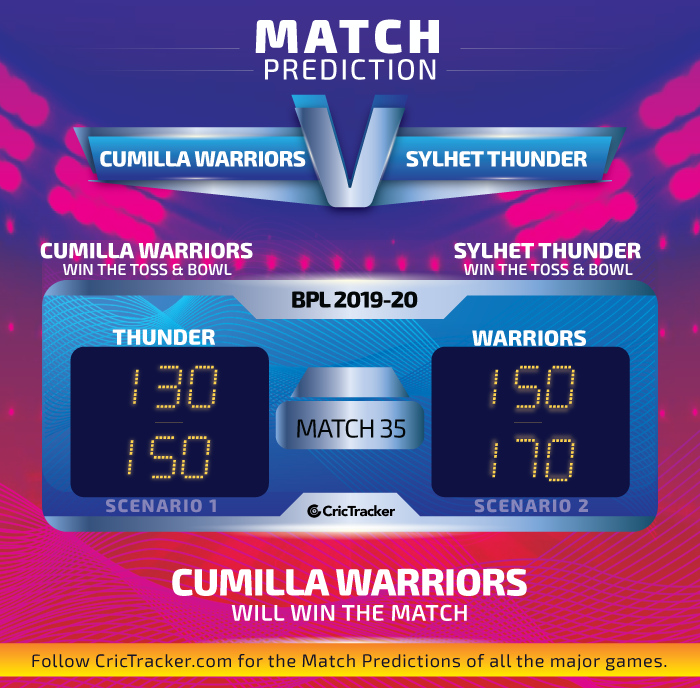