The Rangers will be playing for pride in their last round-robin match.

Dhaka Platoon have already qualified for the playoffs in the 2019-20 Bangabandhu BPL. Mashrafe Mortaza And Co last beat the Rangpur Rangers by 61 runs at the Sher-e-Bangla National Stadium. Dhaka’s only concerns remains to be finishing in the top two. Another win would take them to the top of the table and put them in a comfortable position as far as playing the Qualifier 1 is concerned.

The Platoon also boast of the best run rate, +0.827 among the seven participating teams. Their penultimate round-robin game is against the Rangers itself at the same venue in the first of Friday’s doubleheader. The Rangers, on the other hand, have already been eliminated after the drubbing in the previous game. Shane Watson’s men will look to end the T20 tournament on a winning note.

The pitch in Dhaka has shown tendency of slowing down of late. Spinners have gotten the leather to grip on the surface and extract prodigious turn. Scoring runs in the powerplay with the ball being hard and new will be crucial. The conditions will be a bit hazy. The temperature will be around the 22 degrees Celsius mark with the humidity in the 50s and 60s. The wind will blow at 13 kmph.

Tamim Iqbal has 358 runs at 51.14, but he needs to work on his strike-rate of 114.01. Anamul has given the occasional starts and now needs to show consistency. Mahedi Hasan has gotten a couple of fifties and then has started to flounder. With the ball, he has nine wickets at an economy of 6.52.

Asif Ali and Thisara Perera’s role lower down the order will also be important. Dhaka’s batting depth came to the fore last time after Shadab Khan’s cameo. The tweaker also has sic wickets at an economy of 6.29. Mashrafe Mortaza got his form back with an excellent spell on Wednesday night.

The Rangers’ bowling has found its mojo. Mustafizur Rahman is the leading wicket-taker of the tournament with 19 scalps. Taskin Ahmed also generated pace and picked three wickets in the last game. Mohammad Nabi is also in excellent form with the ball with 11 wickets at an economy of 6.65.

Nabi has been disappointing with the bat though. Gregory has been the Rangers’ stalwart with 216 runs and 14 wickets. Shane Watson is yet to deliver against a quality bowling attack. Mohammad Naim remains to be the prime weapon in their batting. Delport has had his fair share of success as well. 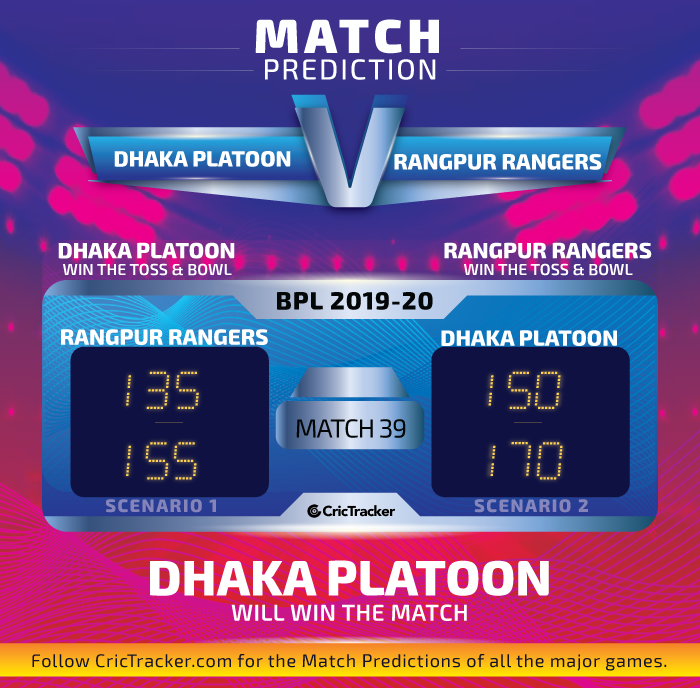