Hazratullah Zazai scored fifty in the opening match for his side as well as Liton Das also looked great with the bat.

The 5th match of the 2019-20 Bangladesh Premier League will be played between Rajshahi Royals and Sylhet Thunder at the Shere Bangla National Stadium in Dhaka.

The match starts at 1:30 PM IST (08:00 AM GMT/2:00 PM Local). Live streaming of this match is available on Fancode and can also be watched on Dream11 App (update it to the latest version).

Rajshahi Royals got off to a great start with a win in BPL 2019-20 against Dhaka Platoon. And, they would be looking to carry on with their winning streak in the upcoming match as well. Hazratullah Zazai scored fifty in the opening match for his side as well as Liton Das also looked great with the bat. Moreover, their bowlers did a commendable job with the ball in the previous match and restricted the opposition at a minimal score.

For Sylhet Thunder, Mohammad Mithun did a commendable job with the bat and mustered 84 runs and was in red hot form against Chattogram Challengers. He would be eager to replicate his form against Royals. One place where they need to work hard is their bowling, who failed to perform in their opener.

There is no chance that rain will have any effect on the game. It is expected to be a bright and sunny day in Dhaka with temperatures ranging between 18-27 degrees according to Accuweather.

The track at Shere Bangla National Stadium is expected to go in favour of the batsmen but spinners will also play an important role. The wicket starts assisting spin heads in the latter part of the game as the pitch starts getting slow. However, the team winning the toss will look to bowl as far as international games are concerned.

Mohammad Mithun will be a vital pick for any Dream11 Fantasy Side as he is in red-hot form with the bat. He played a brilliant knock of 84 runs in the previous match. Johnson Charles is another player to watch out in the upcoming match. 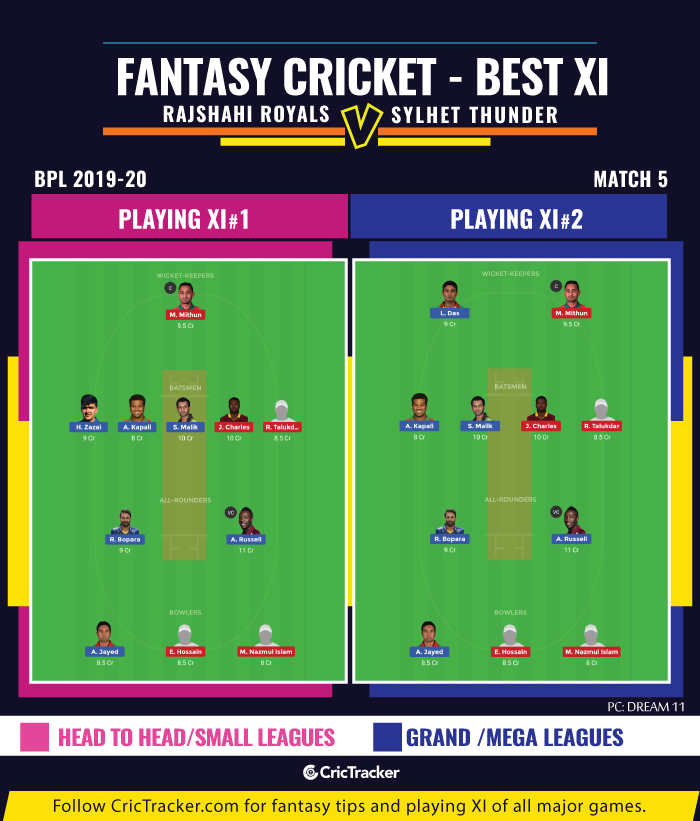 Shoaib Malik is a brilliant all-rounder who has a lot of experience playing in international cricket. In the opening game, he struggled to score runs at a higher strike rate. In the upcoming match, he might play a good knock with his bat.

Sylhet Thunder is expected to win the match.