Imrul Kayes and Lendl Simmons will be an important player for any Dream11 Fantasy Side.

The 7th match of the 2019-20 Bangladesh Premier League will be played between Chattogram Challengers and Rangpur Rangers at the Shere Bangla National Stadium in Dhaka.

Challengers are currently ranked 4th in the points table with two points in as many games. They would be eager to improve their position by grabbing two more points against Rangers in the upcoming match. They have the Lendl Simmons, Chadwick Walton, and Imrul Kayes, who will be responsible for piling some big runs. In bowling, they will bank on the formidable duo of Kesrick Williams, Rayad Emrit.
Rangers got off to a poor start to their tournament as they lost their opening game against Cumilla Warriors and they would be eager to win their first match for the season. With the likes of Mohammad Shahzad and Mohammad Naim, they have a strong opening pair that can smoke some big runs with the bat. Moreover, they have a strong bowling line up that makes them the favourite to win the match against Challengers.

There is no chance that rain will have any effect on the game. It is expected to be a bright and sunny day in Dhaka with temperatures ranging between 18 and 27 degrees according to Accuweather.

The track at Shere Bangla National Stadium is expected to go in favour of the spinners as far as the tournament is concerned. The batsmen have found it difficult to score against spin heads in BPL 2019-20. However, the team winning the toss will look to field first because teams have found it easy to chase at this venue.

Imrul Kayes and Lendl Simmons will be important players for any Dream11 Fantasy Side. Both the batsmen are in red hot form with the bat. Mohammad Shahzad will be another cricketer to watch out in the upcoming match. 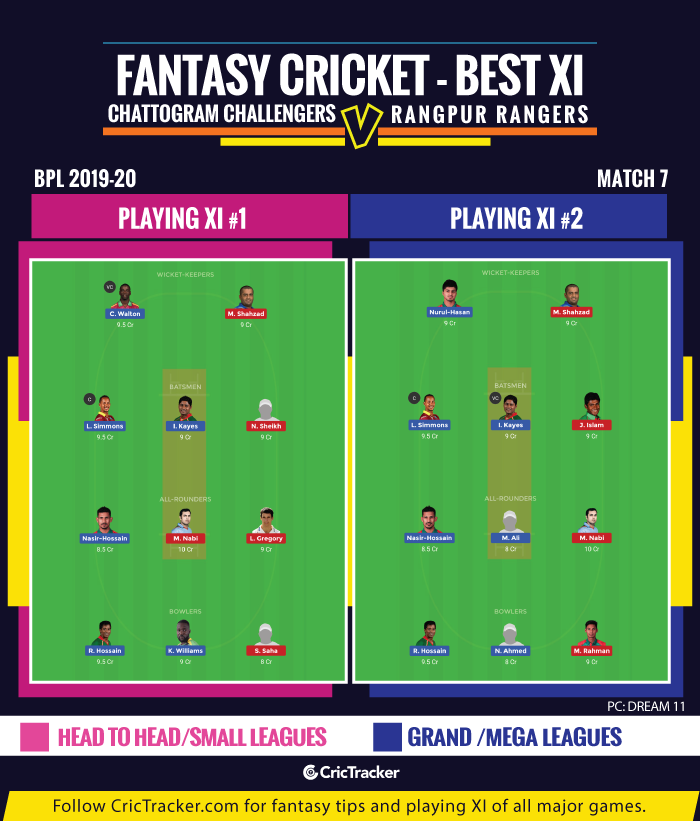 Mohammad Nabi has established himself as one of the prolific all-rounders in international cricket. However, currently, he is struggling with a poor form so he could be a risky pick but will be worth for any Grand League Side.

Chattogram Challengers is expected to win the match.