Both sides have got enough ammunition in their batting unit. Hence, opting for the likes of Chris Gayle, Shoaib Malik as captain/vice-captain can be a good punt.

The 2nd Qualifier of the 2019-20 Bangladesh Premier League will be played between Rajshahi Royals and Chattogram Challengers at the Sher-e-Bangla Stadium in Dhaka.

With Khulna Tigers having already booked their place for the summit clash of the 2019-20 Bangabandhu BPL, both Chattogram Challengers and Rajshahi Royals will be looking to seal the remaining spot, when they lock horns in the second qualifier on Wednesday.

After having lost the first qualifier against Khulna Tigers, Rajshahi Royals will get another crack at claiming the spot in the finals. Chasing 159, the Royals could only muster 131 despite Shoaib Malik racking up a whirlwind 80 off 50 balls, as the remaining batsman had no answers to Mohammad Amir’s (6-17) onslaught, who notched the best individual figures by a bowler in BPL history.

They’ll have their task cut-out though when they face Chattogram Challengers, who earned their way to the Qualifier 2 with a clinical seven-wicket win over Dhaka Platoon with their top-4 leading the way in their run-chase of 145.

It is expected to be a bright and sunny day in Dhaka on Wednesday. According to the weather report, the city is expected to get bathed in sunshine throughout the day. While the temperature is set to fluctuate between 14 and 24 degrees Celsius, the humidity is set to hover around 75%. Moreover, there is no chance of rain playing a spoilsport on Wednesday.

The pitch at the Sher-e-Bangla Stadium has provided a fair balance between the bat and ball. While the batsmen, who have dug in, have got a fair value for runs, the bowlers too have had something to say, as Amir did during his spell of 6-17. Much of the same should be expected on Wednesday.

Average first innings score:– 168 [In the last five games at the venue this season]

Rajshahi Royals- The fact that Shoaib Malik (80) scored more than 60% of his team’s total (133 all-out) in the Qualifier 1, goes to show how their batsmen struggled against Mohammed Amir. Liton Das and Afif Hossain have had great success this season, and the Royals will hope that the duo gives them an ideal start in the Qualifier 2. The likes of Ravi Bopara, Shoaib Malik, and Andre Russell could prove to be x-factors while Mohammad Irfan will lead the bowling unit.

Chattogram Challengers- Each of their top-4- Chris Gayle [39], Ziaur Rahman [25], Imrul Kayes [32] and Mahmudullah [34]- were instrumental in Challengers successfully overhauling the total of 144. They will once again be the key against the Royals. Rayad Emrit claimed three wickets in the last game while Rubel Hossain and Nasum Ahmed chipped in with two. These players should be picked in your Dream11 Fantasy side. 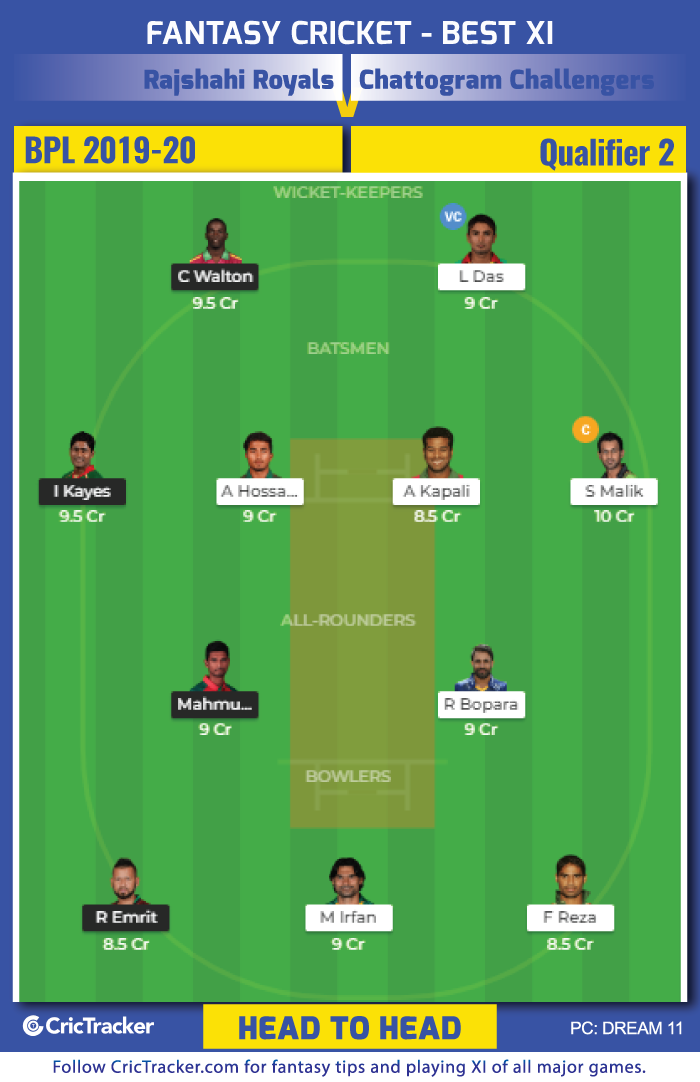 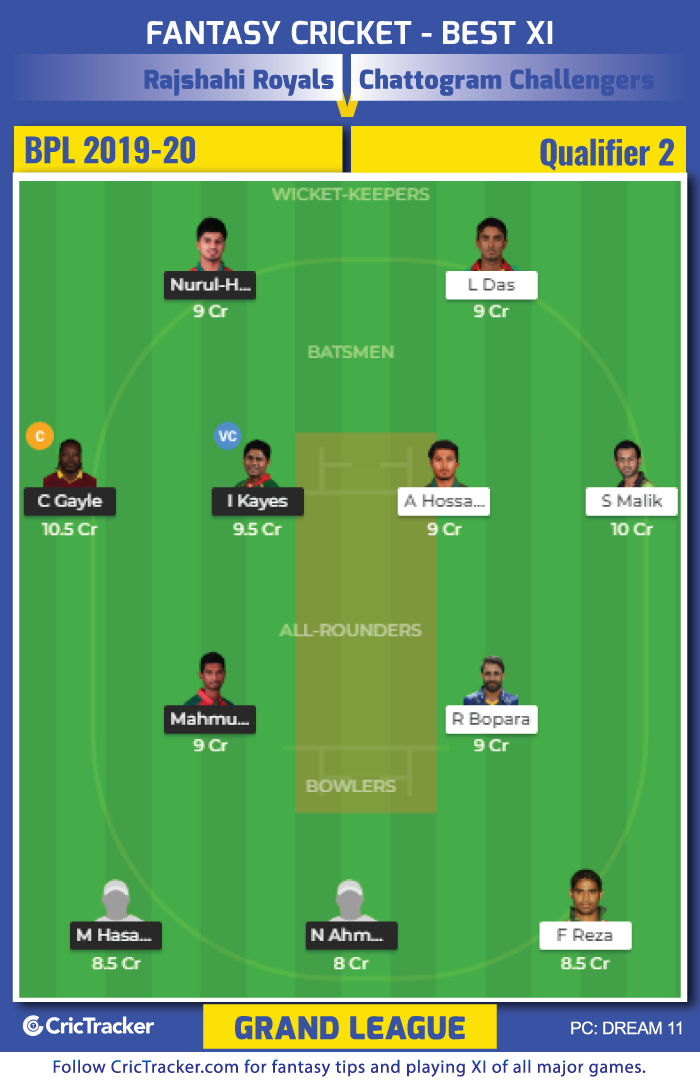 Both sides have got enough ammunition in their batting unit. Hence, opting for the likes of Chris Gayle, Shoaib Malik as captain/vice-captain of your Dream11 Fantasy side can be a good punt.