The Royals will be looking for a better show with the bat in order to roll over the Challengers.

Rajshahi Royals had a horrendous outing against the Khulna Tigers with Mohammad Amir getting a six-wicket haul. Despite Shoaib Malik’s 80, the Royals stumbled in their run-chase. But, Andre Russell and Co will have another bite at the cherry. After the loss, the Royals are set to lock horns with the Chattogram Challengers in the Qualifier 2 on January 15 at the Sher-e-Bangla National Stadium.

In the round-robin stage, both the teams defeated each other once. The Challengers, led by Mahmudullah, are in good stead. They knocked Dhaka Platoon out with a seven-wicket victory in the Eliminator. They lost players like Lendl Simmons and Kesrick Williams, but it hasn’t rattled them. Also, the fact that Mahmudullah returned to their setup has strengthened them even further.

The pitch in Dhaka has behaved indifferently at times. Even as the batsmen have found the conditions favourable, the bowlers have had their say as well. Teams batting second have had slightly more advantage and hence, chasing should be the way forward. The atmosphere will be hazy with the temperature around 20 degrees Celsius. The humidity will mostly be in the high 70s.

Liton Das and Afif Hossain have given the Royals brisk starts on several occasions and will have to deliver. Malik is their leading run-scorer thus far with 432 runs at an average of 43.20. The knock he played against the Tigers, though in a losing cause, would keep him in a positive frame of mind.

Ravi Bopara and Andre Russell can tonk the leather a fair distance. The duo has also been a key in the bowling attack. Dre-Russ in their top wicket-taker with 11 scalps. Mohammad Irfan has also spit venom with 10 wickets. Kapali, Jayed, Kamrul Islam and Afif have chipped in with bits and pieces.

The Challengers’ batting has been their strong point thus far. Chris Gayle has scored runs, though he needs to up his strike-rate. The move to Ziaur Rahman also paid off in the Eliminator. The middle-order has the likes of Mahmudullah and Imrul Kayes, and both have been in jaw-dropping form.

The likes of Chadwick Walton and Nurul Hasan add depth to their batting. Rubel Hossain and Mehedi Hasan Rana have a combined tally of 35 wickets, showing the impact they have had. Rayad Emrit got three wickets last time and is in good form. Nasum and skipper Riyad have been decent as well. 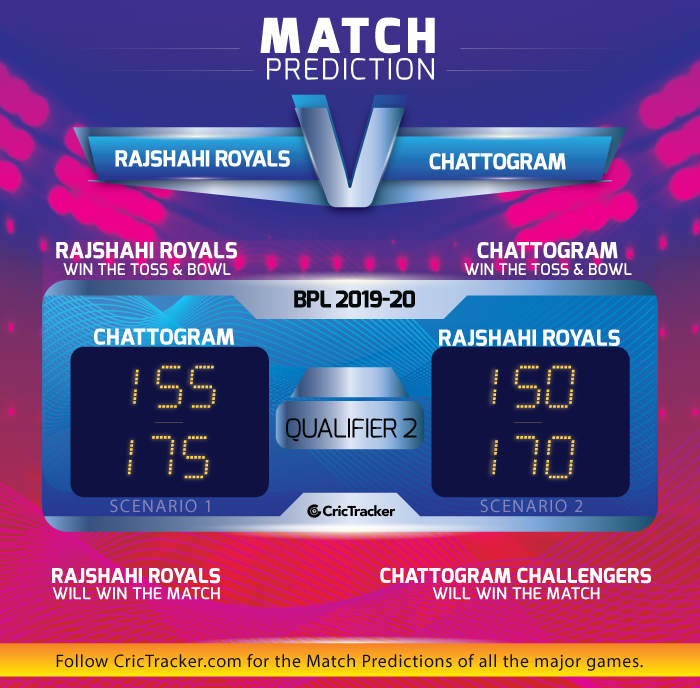