Rangpur Riders are expected to register their 3rd win of the season and hand Rajshahi Kings their 3rd defeat.

The defending champions Rangpur Riders suffered heartbreak in their previous game where they lost by two runs chasing a big score against the Dhaka Dynamites. The Rangpur team bottled the chase from a point where they needed 38 runs from 27 balls with 8 wickets in hand at a stage. This defeat came in the wake of back to back wins after starting the season with a loss. They will be hoping to bounce back against the Rajshahi Kings.

The Mehidy Hasan-led Rajshahi team suffered two big defeats and won one against the Khulna Titans who await their first win of the season. Rajshahi were defeated by the Dynamites with a huge margin of 83 runs. In the previous match, they lost to the Comilla Victorians by a 5-wicket margin. Mehidy, batting at No.3 and Isuru Udana at No.10 were the only players to cross 30 for the Kings in the game against the Victorians.

The 13th match of the Bangladesh Premier League (BPL) 2019 will be played between Rangpur Riders and Rajshahi Kings at the Sher-e-Bangla National Stadium in Mirpur, Dhaka.

The afternoon matches have been slightly high scoring since the change in timings. Once again, the first game of the day could produce a 150+ total like on Friday and Saturday.

Seekkuge Prasanna of Rajshahi Kings was part of Sri Lanka’s squad on New Zealand tour. He is expected to join the squad very soon. AB de Villiers will also join the Rangpur Riders in the next few days.

Chris Gayle has the last chance to make the most of his favourite venue, Dhaka before the tournament shifts to Sylhet for the next leg. The Universe boss has scored 1239 runs at an average of 47.65 with a strike-rate of 160.9 in the Twenty20 format at the Sher-e-Bangla Stadium. Gayle also hit 79 fours and a stunning number of 110 sixes across the 31 T20 innings here.

Rilee Rossouw has two fifties in four matches this season and will be a crucial player for the Riders yet again. Mehidy, Bopara and even Howell among all-rounders can be considered for multipliers. Mehidy coming out to bat at the top will increase his effectiveness in fantasy cricket. 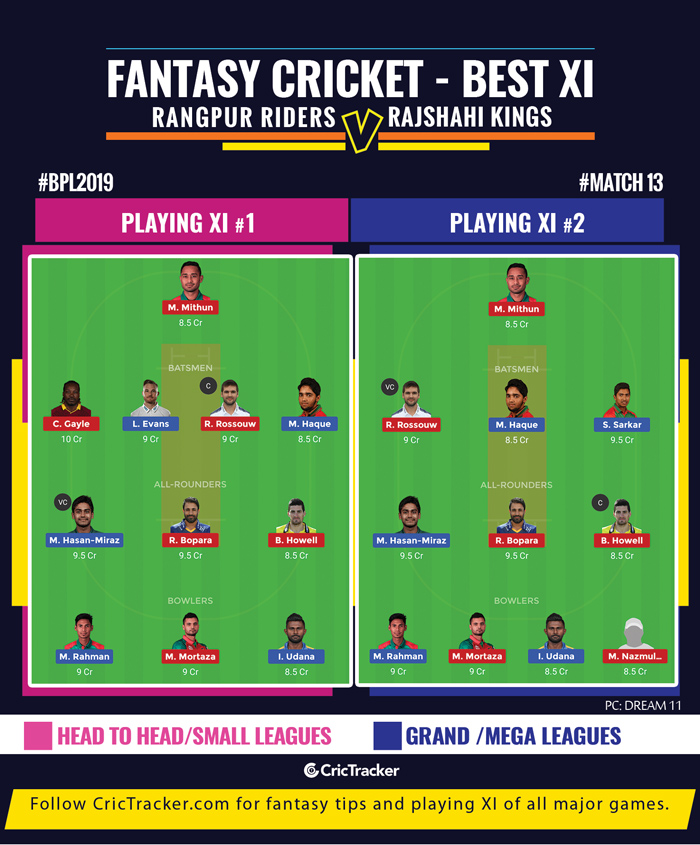 Rangpur Riders are expected to register their 3rd win of the season and hand Rajshahi Kings their 3rd defeat.