The Khulna Titans are expected to open their points tally with a win against the Rajshahi Kings.

Khulna Titans have lost all the four matches they played in this tournament and are placed at the bottom of the points table. They will be facing the Rajshahi Kings for the second time in the season against whom they suffered a 7-wicket defeat. Titans came close to opening their tally against Chittagong Vikings where they involved in a Tie having conceded 18 runs in the last over.

The Titans failed to chase 12 runs in the Super Over where they made only 10 runs. The Khulna’s NRR currently reads -1.542 which is worst among all seven teams. The Rajshahi Kings have the second-worst NRR of -1.068. The Mehidy Hasan-led Rajshahi team have suffered two big defeats and two wins. The Rajshahi’s first win came by defeating the Titans and the Titans will be hoping to get their first against Rajshahi.

The 15th match of the Bangladesh Premier League (BPL) 2019 will be played between Khulna Titans and Rajshahi Kings at the Sylhet International Cricket Stadium.

The average first-innings score reads 144 in the last five T20s played at the Sylhet in the afternoon. The chasing sides won on four occasions where they conceded less than 150 and lost by 11 runs in the game while chasing a target of 167.

Mahmudullah inconsistency is one of the main factors for Khulna Titans’ poor performances in this tournament. The all-rounder has scored only 76 runs and picked one wicket from four matches thus far. He scored 33 in the previous game which will give him confidence.

Mehidy Hasan Miraz and Paul Stirling are two players from this game who are expected to make difference with both bat and ball. They will be ideal as captain and vice-captain. The likes of Mahmudullah and Isuru Udana will be perfect alternatives for those roles. 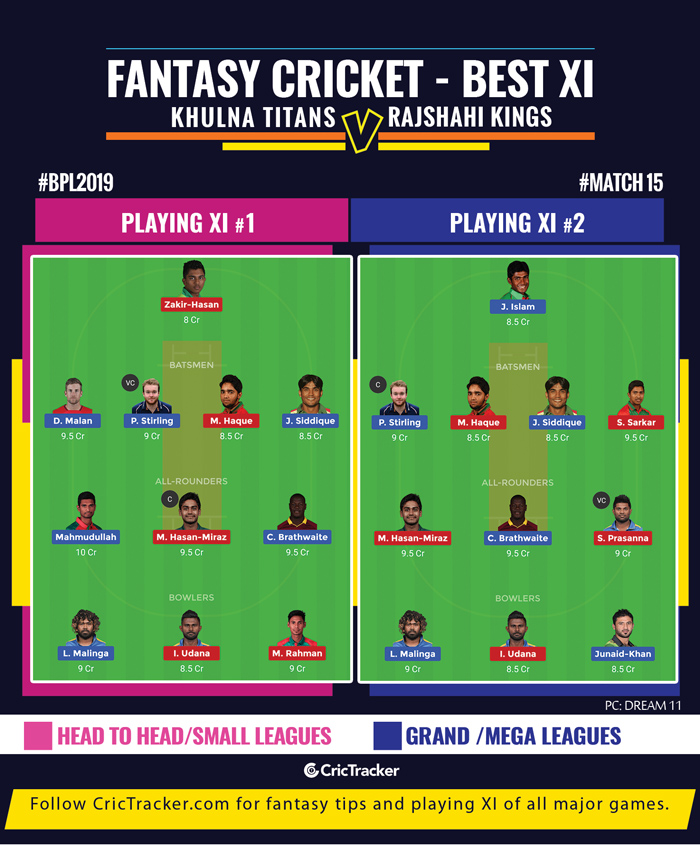 The all-rounder category contains Mahmudullah, Carlos Brathwaite, Mehidy Hasan Miraz, David Weise, Ryan Ten Doeschate and Seekuge Prasanna. No one can predict which three will be the top picks but based on their performances in the tournament and expectations over them, Brathwaite, Mahmudullah and Mehidy will be the ideal trio.

The Khulna Titans are expected to open their points tally with a win against the Rajshahi Kings.