Rajshahi lost both their matches against Dhaka last season.

The second match of the 2019 edition of the Bangladesh Premier League (BPL) is set to be played between Dhaka Dynamites and Rajshahi Kings at the Sher-E-Bangla National Stadium in Mirpur. The Dynamites, the three-time champions of the T20 championship, had an impressive campaign last time around and progressed to the final where they lost against Rangpur Riders.

The Kings recently appointed Mehidy Hasan Miraz as their captain and they would be looking to start their journey on an impressive note.  Back in 2017, the team, captained by Mushfiqur Rahim, finished at the sixth position of the points table. Last season, Rajshahi lost both their matches against Dhaka at the same venue and would be keen to turn their fortunes around this time around.

The pitch in Dhaka has been a sporting one thus far. During the couple of T20Is between Windies and Bangladesh, even as there were scores of above 200, the bowlers also had their say. Moreover, being a night-match, the track is expected to get batting friendly as the match progresses. Hence, it won’t spring a surprise if the teams opt to field first after winning the toss.

The left-handed duo of Sunil Narine and Hazratullah Zazai would open the batting with Englishman Nurul Hasan at number three. Nurul Hasan and skipper Shakib Al Hasan would bat at number four and five respectively, with Shuvagata Hom at number six. A lot would depend on how Andre Russell weaves his magic. Rubel Hossain, Andrew Birch and Qazi Onik are the speedsters.

Mominul Haque and Soumya Sarkar would open the batting with Pakistani veteran Mohammad Hafeez to bat at number three. Laurie Evans is slotted to bat next. Arafat Sunny would also partner skipper Mehidy Hasan Miraz and Qais Ahmed from Afghanistan in the spin department. Mohammad Sami, Kamrul Islam and Mustafizur are the specialist fast bowlers.

The prediction is for the Dhaka Dynamites to start the tournament on a high. 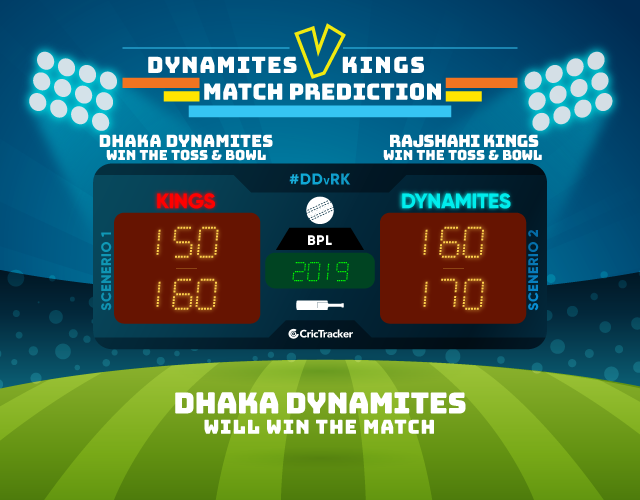