Sylhet Sixers are expected to give their skipper David Warner a memorable farewell with a win over Rangpur Riders.

The Sylhet Sixers continue their poor run in the ongoing Bangladesh Premier League having won only two of the six matches they played. They will be hoping that their new opening combo of Liton Das and Sabbir Rahman be consistent in coming games. Their last home match will be last of the season for their skipper David Warner who is set to nurse the elbow injury in Australia.

Warner will lead the Sixers for one last time against the defending champions Rangpur Riders. The Mashrafe Mortaza-led team is also on same lines as the Sixers winning two and losing four. The hosts got the better of Rangpur on Wednesday posting a huge total of 187/5. The Riders will be boosted by the inclusion of AB de Villiers who joined the squad on Thursday and could be a part of this game.

The 21st match of the Bangladesh Premier League (BPL) 2019 will be played between Sylhet Sixers and Rangpur Riders at the Sylhet International Cricket Stadium.

The Sylhet Stadium produces a slightly better scoring game in the afternoon. The Sylhet leg of matches are expected to finish on a similar note.

This game will be David Warner’s last for the Sylhet Sixers this season and will be replaced by Jason Roy. AB de Villiers joined the Rangpur Riders on Thursday.

1, 8, 23 and 7 these are the scores Chris Gayle has managed in the tournament so far. The Universe Boss could soon be benched due to the choice of the overseas players if he fails to improve immediately. Gayle has a brilliant record in Dhaka which will host the tournament again from the next week.

Rilee Rossouw has been in brilliant form this season and has to be the captain of your team. Liton Das and Nicholas Pooran can be picked up as vice-captain. David Warner and Afif Hossain will be perfect alternatives for these roles. 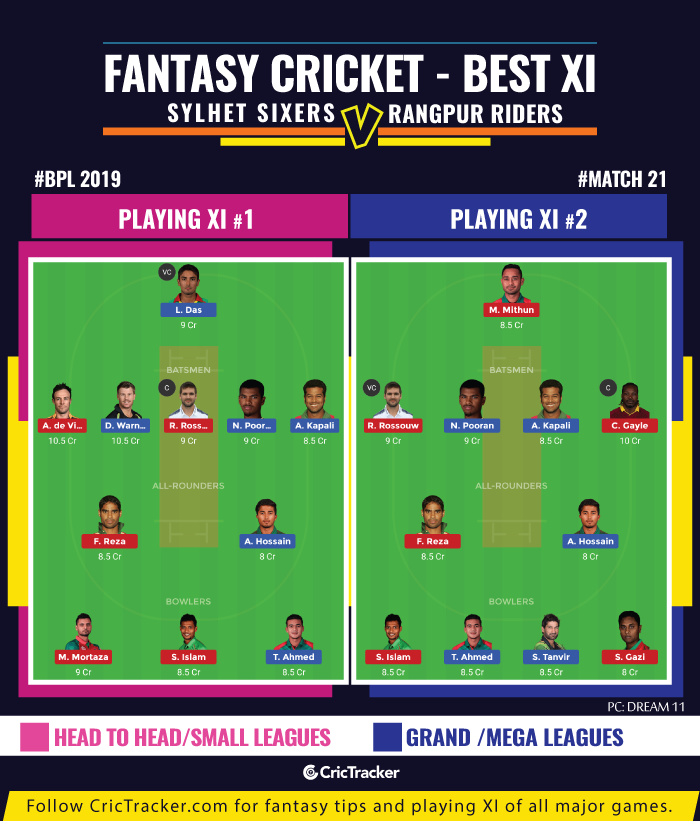 Picking AB de Villiers might not be a sane decision given the way he batted during the MSL. The former South African started the tournament well despite staying away from the game for nearly six months. In the later stages, De Villiers struggled to find the boundaries at ease, however, he did finish with a 90-run knock.

Sylhet Sixers are expected to give their skipper David Warner a memorable farewell with a win over Rangpur Riders.