Comilla Victorians are expected to bag their 5th win and hand the Rajshahi Kings their 4th defeat.

The previous game was a really good display of their batting strength and depth by the Comilla Victorians as they chased down a 180+ target against the Khulna Titans to register their 4th win in the tournament. After a century opening stand, the Victorians slowed down towards the end but it was Thisara Perera who ensured that they got over the line. With four wins from six matches, the Comilla franchise is placed at No.3 in the table behind the Dhaka Dynamites and Chittagong Vikings.

Comilla will kick start the second-leg matches of this BPL edition in Dhaka when they face Rajshahi Kings in the afternoon fixture. The Rajshahi have three wins and three losses from this six matches they played till now. They would surely not be a happy side given the potential they have in their bowling attack especially with most of the games being low scoring encounters.

The 23rd match of the Bangladesh Premier League (BPL) 2019 will be played between Comilla Victorians and Rajshahi Kings at the Sher-e-Bangla National Stadium in Mirpur, Dhaka.

The day games during the opening leg of the tournament were high scoring when compared to the night matches. The second leg at Dhaka promises to be a run feast like it was in Sylhet.

Comilla’s Shoaib Malik is part of Pakistan’s ODI squad in South Africa. There is no news about Evin Lewis who was forced to retire hurt during this tournament.

Rajshahi Kings’ Isuru Udana has joined Sri Lanka A squad for the Unofficial series against Ireland A and he will be unavailable for this game.

Arafat Sunny’s left-arm spin came handy for the Rajshahi as the 32-year-old bagged eight wickets from six matches. In the previous two games, Sunny took 3/8 and 2/25. He will be crucial for the Kings in the remainder of the season.

Mehidy Hasan Miraz would be captain or vice-captain given his all-rounder skills. There is a danger that Comilla might not use Thisara Perera to the fullest which will reduce his efficiency. 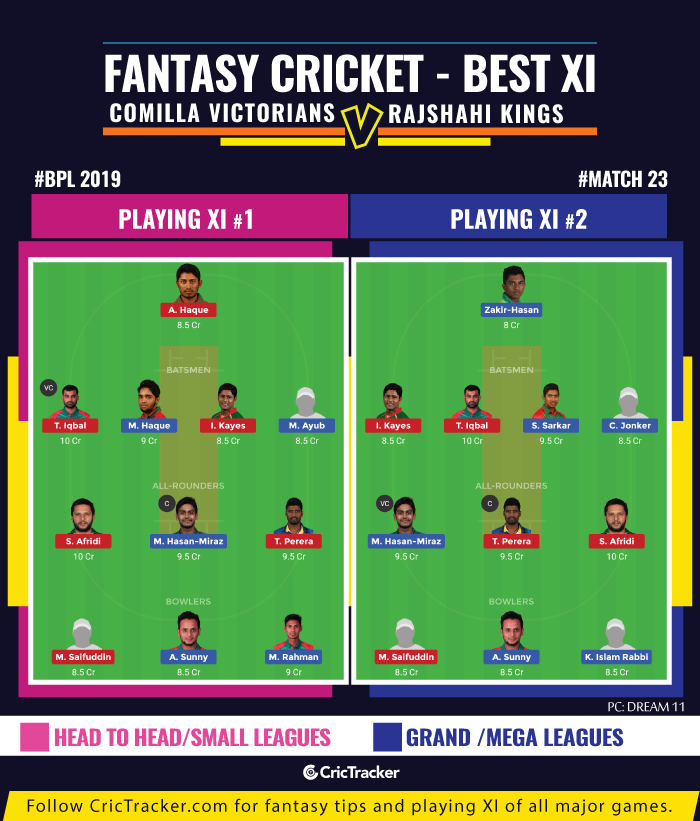 From the batsmen’s category – Tamim Iqbal, Imrul Kayes and Mominul Haque will be the perfect picks. The other names haven’t got much to showcase with regards to their form in this edition while overseas players were subjected to chopping and changing.

Comilla Victorians are expected to bag their 5th win and hand the Rajshahi Kings their 4th defeat.