The Sylhet Sixers are expected to start the season with a comfortable win over the Comilla Victorians.

Comilla Victorians and Sylhet Sixers will begin the 2019 BPL campaign as they face off in the 3rd game of the tournament on Sunday. The Victorians, who won nine of the 12 matches and topped the league phase, were knocked out of the Qualifiers losing by a big margin in both the outings. Led by Tamim Iqbal, the Victorians will be hoping to put on a similar performance like the previous season with a better ending than the last time.

The Sylhet Sixers, on the other hand, had a rather disappointing 2017/18 season with only four wins from 12 matches. With the likes of David Warner, Nicholas Pooran and Sandeep Lamichhane in their squad this time around, the Sixers will be hoping to perform better. Warner, the former Australian opener, will be leading the team this season. Steve Smith, who got the permission late from the BPL governing council, will be featuring for the Victorians.

The 3rd match of the Bangladesh Premier League (BPL) 2019 will be played between Comilla Victorians and Sylhet Sixers at the Sher-e-Bangla National Stadium in Mirpur, Dhaka.

This game will be telecast live on DSports in India.

Unlike the recent trend, the track in Dhaka turned out to be a two-paced one on the opening day of the tournament. The newly prepared pitch had moisture in it and did not settle down even in the night game under the lights. It will be interesting to see how the tracks behave on the second day.

Asela Gunaratne and Dasun Shanaka of Comilla Victorians are part of Sri Lanka’s ODI squad that is in New Zealand. David Warner has reached Bangladesh in advance while Steve Smith will be there on Saturday.

Nicholas Pooran has got some fame of late thanks to a good fifty against India in the T20I series followed by a brilliant season with the Northern Warriors in the T10 League. The keeper-batsman’s dashing exploits will help him succeed in the T20 format.

Litton Das has to be among the multipliers given some of his recent knocks against big teams. His teammate Nicholas Pooran can also be considered for one of the multiplier roles. If the pitch continues to trouble the batsmen, the likes of Sandeep Lamichhane and Sohail Tanvir are expected to come into the big equation. 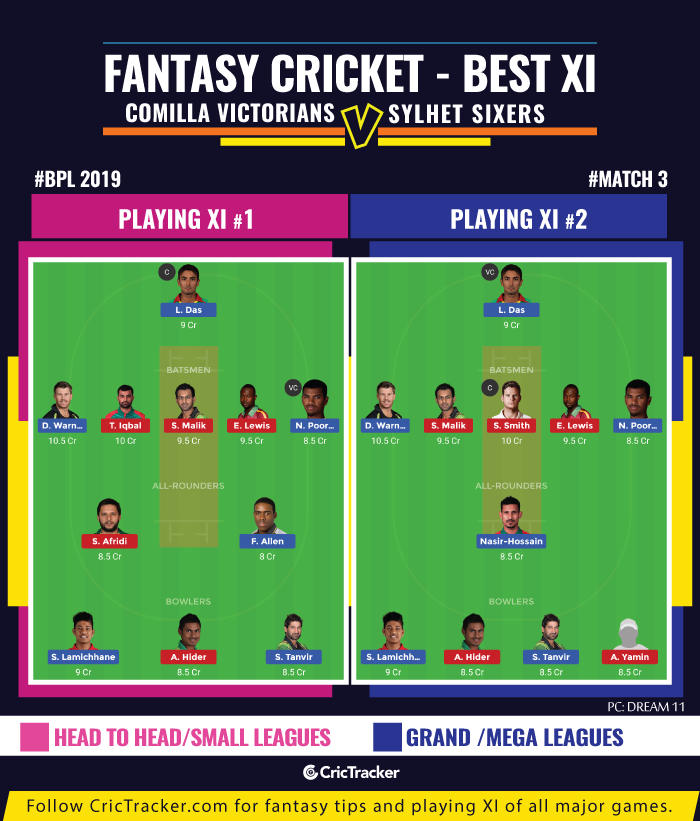 The all-rounders have great demand in the T20 fantasy competitions but the game between Comilla and Sylhet could be an exception given the options in hand. Shahid Afridi can’t be trusted to go big early on given the fact that he has been less active with his cricket of late.

The Sylhet Sixers are expected to start this season with a comfortable win over the Comilla Victorians.