Who should you pick between Brendan Taylor and Liton Das?

Sylhet Sixers and Khulna Titans will face off in the day game on Saturday in Chattogram which is the battle for the bottom of the table. Khulna started the season with four consecutive losses and were defeated three times in a row after their first win. They got the better of the Sixers in the last game to register their second win. On the other hand, the Sixers have three wins from nine matches.

Both the teams have to win their remaining three encounters to be in contention for the Qualifiers. Sixers managed to win only two games until David Warner led the team. Sohail Tanvir took the captaincy responsibilities and managed to end the 3-match losing streak win a huge 76-run win over the Rajshahi Kings that boosted their NRR. Warner’s replacement Jason Roy made 28-ball 42 in his first match.

The 31st match of the Bangladesh Premier League (BPL) 2019 will be played between Sylhet Sixers and Khulna Titans at the Zahur Ahmed Chowdhury Stadium in Chattogram.

The day T20 matches at Chattogram are usually on the high scoring side. The chasing teams will not find it really challenging to overhaul big totals.

Wayne Parnell is available for selection having replaced Imran Tahir. Sandeep Lamichhane joined the Nepal team to face UAE in a 3-match ODI series that started on Friday.

Alok Kapali was well known as a hard hitting middle-order batsman who can chip in a few overs with the ball during his International career. However, in the ongoing BPL, Kapali has fine-tuned his leg-spin bowling. In the game against Titans, he picked up a four wicket-haul and took two wickets against Rajshahi. He has ten wickets from nine matches adding to 83 runs with the bat.

Brendan Taylor stepped up to the role as the keeper of Khulna. He scored 28, 32 and 48 in the three matches he played so far. He could well be the biggest pick from this game. Other top-order bats Jason Roy, Junaid Siddique and Sabbir Rahman can be picked either as captain and vice-captain. Mohammad Nawaz and Liton Das can also be picked as captain while Mahmudullah and David Wiese suit the vice-captain role. 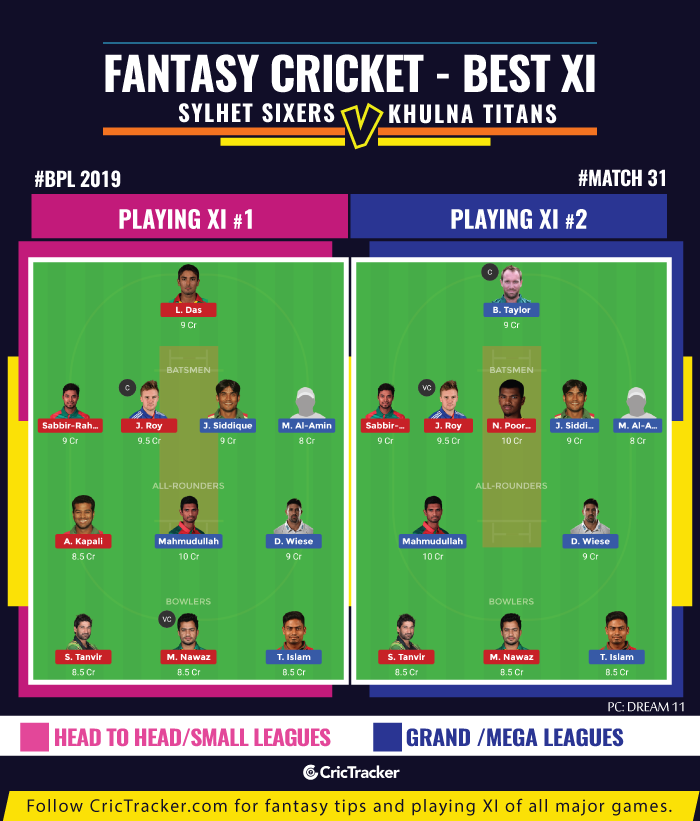 It is a gamble between Brendan Taylor and Liton Das who have been in enviable form of later. Taylor has been at his best from the time he got in the team while Liton has got some good scores under his belt lately. Both of them open the batting and keep wickets, so it is not an easy decision in any way.

Sylhet Sixers might just edge past Khulna Titans due to a better all-round bowling attack.