The battle between Vikings and the Kings is expected to be a close one.

The Bangladesh Premier League (BPL) 2019 is almost reaching the closing stages. We’re just a week away from the playoffs and the top four teams are yet to be decided. At the moment, the Chittagong Vikings seem to be the front-runners for one of the spots as they’ve won six games out of seven. However, the priority for the side will not only be to stay in the top four but to finish among the top two.

In an attempt to do the same, they will face the Rajshahi Kings on Saturday. Both the teams have games on consecutive days and more than the Vikings, a win here is more critical for the Kings. The side has won four out of eight matches thus far. They’ll have five wins and ten points if they win against the Sylhet Sixers on Friday.

You wouldn’t want to be a bowler when playing at Chattogram. The pitch is for the batsmen and they can blindly swing through the line. However, the ball tends to skid and keep low at times. So, one should be wary of the deliveries that are bowled straight. The weather will cool down during the evening while the humidity levels are predicted to rise.

The Chittagong Vikings have been playing well together as a team. They defeated the Rajshahi Kings by 6 wickets when these two teams met each other previously in the season. They’ll hope to keep the winning combination going and might not change much with their eleven. Shahzad, Delport, Rahim and Hossain form the core of the batting.

The Rajshahi Kings have got a few decisions to make going into this game. They rested Soumya Sarkar and Qais Ahmed for the contest against Sylhet Sixers. It will be interesting to see if they’ll bring both these players back into the eleven again.

Laurie Evans has been in some scintillating form at the top of the order single-handedly winning games for his team. The management will hope that the other players also chip in as we are reaching the playoff stages of the tournament.

The prediction is that the Vikings will win the match. 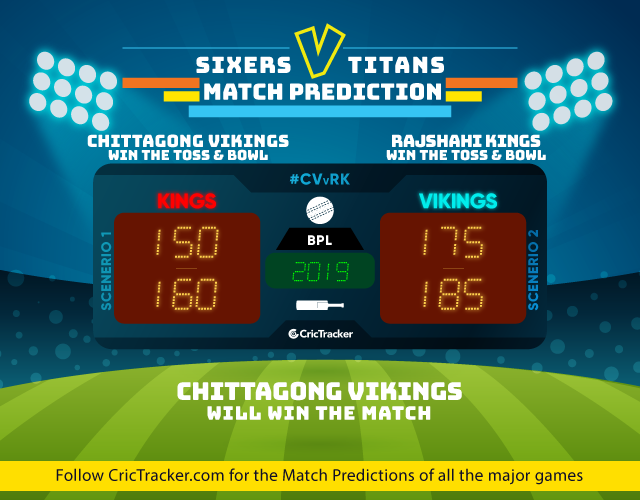