It won't be easy for the Dhaka Dynamites to gain back the lost momentum.

After some sheer domination in the initial parts of the league, the Dhaka Dynamites seemed to have lost their way all of a sudden. Starting from their first loss of the season against Rajshahi Kings, the team ended up on the wrong side of the result on three out of the last four occasions. Yet, such was their domination in the first four games that they still are at the second spot in the points table with an NRR of +1.36.

On their road to redemption, they will be facing the Rangpur Riders in Chattogram. The Riders have got the momentum on their side with a hat-trick of wins. They defeated the Sixers, Titans and Vikings by massive margins in their last three matches. Thus, it should be a great contest to watch and should be a closely fought battle.

At least one inning in the four games played at Chattogram thus far witnessed a score above 180. 104 by the Rajshahi Kings is the lowest score at the venue and the track here highly favours the batsmen. The Riders have registered a total of 239 in the only game they played here and won the match by 72 runs. Hence, batsmen from both the teams should have great fun. The skies are predicted to be cloudy and there will be a gentle breeze blowing around.

With some non-stop cricket in the first two weeks of the tournament, the Dhaka players would’ve been surely fatigued. But, now that they have got a good six-day break in between games, they should be fresh and energised. Their eleven looks pretty much settled and the management could be looking at the possibility of including Kieron Pollard in place of Darwish Rasooli.

The Rangpur Riders’ top four batsmen include some of the most dangerous players around in T20 cricket. Even if one of them can light up some fireworks, the team is sure to be in a very good position. Alex Hales and Rilee Rossouw have scored centuries against the Vikings and were brilliant. All these four batsmen should enjoy batting on the Chattogram track. The bowling department also looks good with some top-notch bowlers in there.

It is tough to predict a winner for this game. Yet, considering the recent form, the Rangpur Riders are expected to bask the glory. 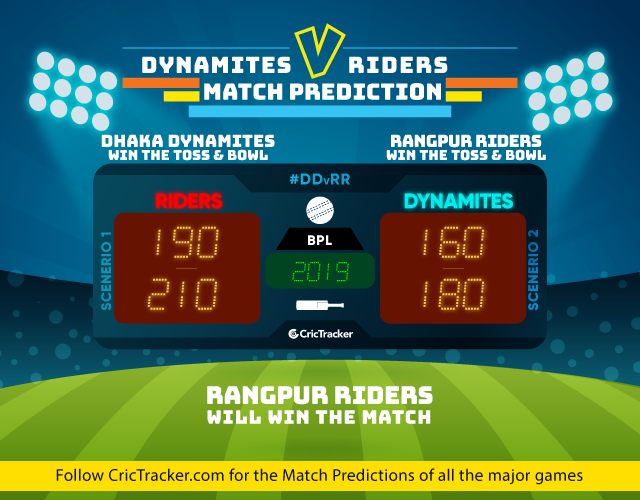