The Vikings have got to win both the matches, the Dynamites need to win at least two.

Things are getting extremely wayward for the Dhaka Dynamites and the Chittagong Vikings as we are reaching the business end of the tournament. While these two teams were expected to finish in the top two, they are imperilling their chances of getting there with the miserable performances in the last few games. These two teams will combat each other in the 37th match of the BPL in an attempt to revive their fortunes.

The focus for these two teams now is to secure a spot in the playoffs in the first place. They are coming on the back of some embarrassing defeats in their respective previous games. There are two and three games left for the Vikings and Dynamites respectively. While the Vikings have got to win both the matches, the Dynamites need to win at least two.

The 37th match of the Bangladesh Premier League (BPL) 2019 will be played between Chittagong Vikings and Dhaka Dynamites at the Zahur Ahmed Chowdhury Stadium in Chattogram.

The Chattogram stadium witnessed its first low-scoring match in the encounter between Chittagong Vikings and Comilla Victorians. Even though the pitch is still a great one to bat on, multiple factors like rain and poor shot selection from Vikings’ batsmen resulted in these low scores. The upcoming match, as usual, could be a high-scoring affair.

Robbie Frylinck is expected to miss this game as well.

Yasir Ali played a total of 8 games in BPL 2019. He has scored 253 runs in the tournament including three fifties. Moreover, he also smashed three sixes in this edition of the league and scored two fifties in the three matches that he played in Chattogram. He is quite a reliable pick and is a good choice to be in your eleven.

Shakib Al Hasan, Andre Russell, and Mushfiqur Rahim are the preferred captains for this upcoming match. You could choose between Mohammad Shahzad, Rony Talukdar, and Sikandar Raza as your vice-captain. If you are looking at alternatives, it could be anyone among Cameron Delport, Sunil Narine, and Yasir Ali. 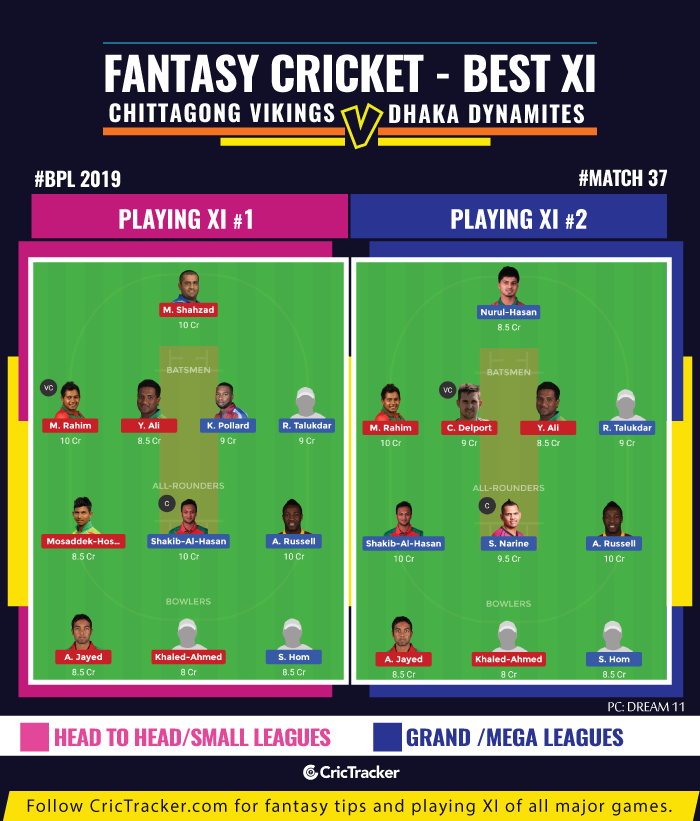 Not picking Sunil Narine for this game will be a good option as he wasn’t at his best in the recent matches. Having the additional 9.5 credits will allow you to completing the team with good players.