Khulna Titans lost to the Dhaka Dynamites by 105 runs when they met earlier in the tournament.

The last league game of the BPL 2019 will be played between the Dhaka Dynamites and the Khulna Titans. The Titans are out of the race for the playoffs as they only managed to win two out of eleven games. However, they’ve got an opportunity to upset the plans of the Dynamites at this stage of the tournament.

Dhaka has got five wins in ten games thus far. Even if they win one game out of the remaining two, they’ll qualify for the playoffs. They will play the first of their remaining two games against the Comilla Victorians. With a lot of competition for the top two spots, the Dynamites should register good wins in both these games to get the second chance in the playoffs.

Even though the pitch seems to be batting-friendly, it might have a lot on offer for the bowlers too. The Dhaka track has witnessed teams bowled out for paltry scores as well. Hence, it could be an even contest between the bat and the ball. The temperatures will cool down by a slight margin as the game progresses.

Mizanur Rahman will mostly open the innings with Sunil Narine. The form of the latter has been a bit of concern. However, Narine will hope to deliver in the crucial games of the tournament. The middle-order looks strong with the likes of Rony Talukdar, Shakib, Nurul Hasan, Pollard and Russell. Shuvagata Hom and Rubel Hossain are certainties in the bowling line-up. But, the same can’t be said about Andrew Birch and Mahmudul Hasan.

In their last game when they met the Comilla Victorians, the Khulna Titans lost by 80 runs. They lost to the Dhaka Dynamites by 105 runs when they met earlier in the tournament. It won’t be an easy task for them to defeat Dhaka in their home conditions. They might go with the same eleven as it was for the previous encounter against the Victorians.

The prediction is that the Dhaka Dynamites will win the match. 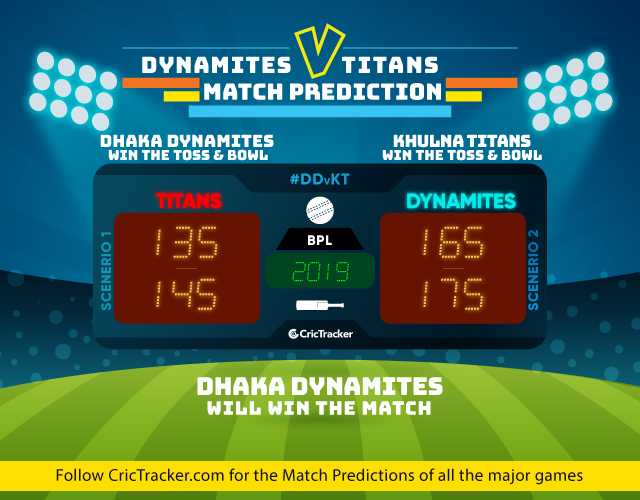