The Rangpur Riders are expected to get a boost with the inclusion of Chris Gayle against the Comilla Victorians.

The defending champions Rangpur Riders started the season with a poor effort with the bat but bounced back on the second day with a close win against the Khulna Titans. Rilee Rossouw’s performance played a crucial role in their first win of the season. They will be up against the Comilla Victorians in their third match which could finally witness Chris Gayle in their playing XI. The Universe Boss couldn’t feature in the first two matches of the tournament due to an interesting reason.

Gayle arrived late and was jet-lagged for the opening game and was set to play in the second game. However, the team management was told that Gayle’s NOC has not been received by the BPL governing team. His NOC documents were sent by the WICB late on Sunday clearing him for the game against Victorians, who started the season with a close win against the Sylhet Sixers. Shahid Afridi’s all-round efforts played a crucial role in Comilla’s victory on Sunday.

The 6th match of the Bangladesh Premier League (BPL) 2019 will be played between Comilla Victorians and Rangpur Riders at the Sher-e-Bangla National Stadium in Mirpur, Dhaka.

The game under lights has produced higher scores compared to that of the afternoon matches. The side batting first has made 189 and 169 in the second game on first two days of the tournament. The five T20 games prior to this BPL witnessed scores of 190+.

Asela Gunaratne and Dasun Shanaka of Comilla Victorians are part of Sri Lanka’s ODI squad that is in New Zealand. Rangpur Riders’ AB de Villiers is unavailable for the first half of the tournament.

Chris Gayle would be disappointed to miss the first game given his batting record here. He scored 1230 runs at an average of 51.25 with a strike-rate of 162.69 in the Twenty20 format at the Sher-e-Bangla Stadium. Gayle also hit 79 fours and a stunning number of 109 sixes across the 29 T20 innings here.

Chris Gayle’s record at the venue will make him a perfect choice for a multiplier. The pitches will suit Ravi Bopara’s skills and has to be considered at least as the vice-captain. Shahid Afridi showed that he has still has some fuel left in his tank in the game against Sixers. 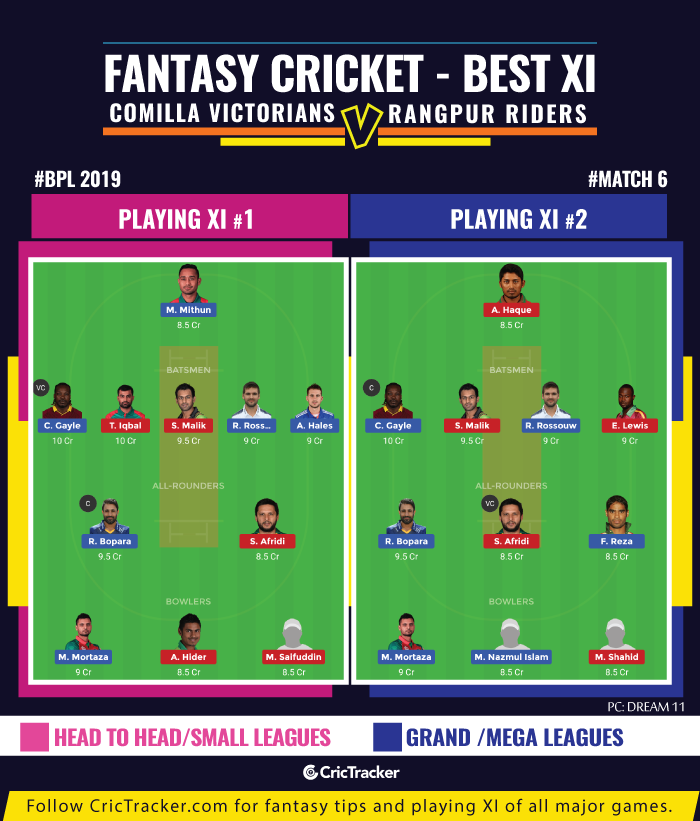 The batsman category comprises of top Internationals – Chris Gayle, Tamim Iqbal, Steve Smith, Shoaib Malik, Alex Hales and Evin Lewis. However, only a maximum of five can be picked from this list of six. Smith can be excluded given hit struggle in the previous game. The required number of players can be picked from the remaining five.

The Rangpur Riders are expected to get a boost with the inclusion of Chris Gayle against the Comilla Victorians.