The Dhaka Dynamites are expected to secure their 3rd consecutive win by defeating the Rangpur Riders.

The finalists of the previous season Rangpur Riders and Dhaka Dynamites will face off in the 9th game of the Bangladesh Premier League (BPL) 2019 in Dhaka. The defending champions Rangpur started the season with a defeat but bounced back with consecutive wins. The Riders will expect Chris Gayle to get back in form as early as possible and power them to win as he did in the final stages of the last edition.

The Dynamites, on the other hand, have posted big totals irrespective of the tracks. The Shakib Al Hasan-led team posted 180+ in both matches and secured huge wins by bowling out the opposition cheaply. Hazratullah Zazai scored quick-fire half-centuries in both the games while all their bowlers picked up wickets later. The Dynamites will be hoping to avenge for the big loss in the last season’s final with a similar win.

The 9th match of the Bangladesh Premier League (BPL) 2019 will be played between Dhaka Dynamites and Rangpur Riders at the Sher-e-Bangla National Stadium in Mirpur, Dhaka.

As the afternoon game will be played 90 minutes late than on the previous days, there is a lesser chance of moisture during the first innings. However, the nature of the track remains uncertain like on the first three days.

Rangpur Riders’ AB de Villiers is unavailable for the first half of the tournament.

The Dhaka Dynamites’ all-rounders will be game changers for the franchise. The likes of Shakib, Russell and Narine have the ability to change the course of the game with both bat and ball. None of them can be kept out based on the impact they will be having in the game. 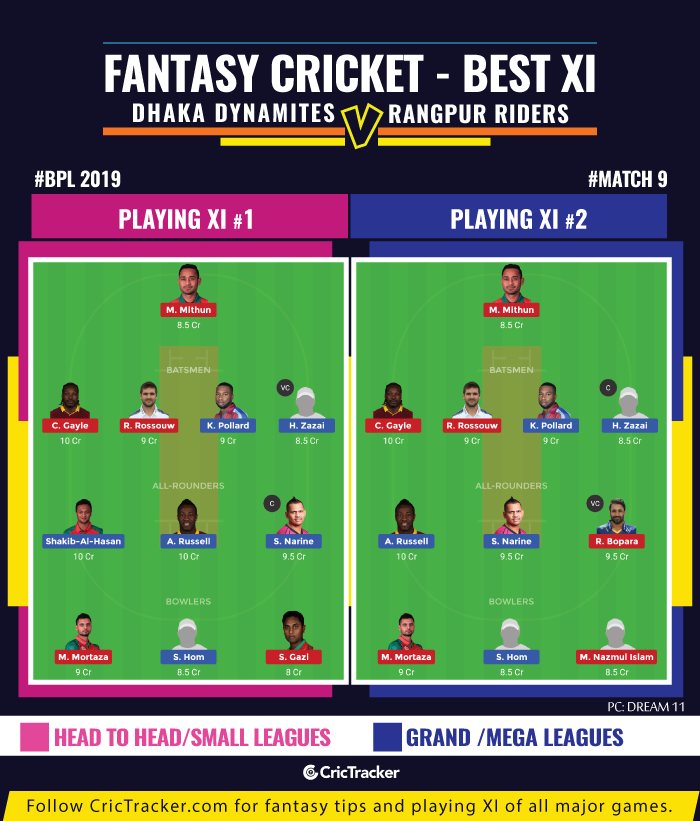 The all-rounders’ category is filled with the Dhaka trio of Shakib, Russell and Narine who are effective as well. Alongside this trio, Ravi Bopara, Farhad Reza and Benny Howell will be playing for the Rangpur Riders. There is hardly a way to pick any of the three from this list.

The Dhaka Dynamites are expected to secure their 3rd consecutive win by defeating the Rangpur Riders.