Both the teams have a chance to register a hat-trick of wins in BPL 2019.

After having thrashed their opponents in consecutive games, the Dhaka Dynamites will face the Rangpur Riders for the 9th game of the BPL. This is definitely one of the biggest contests in the Dhaka phase of the league. The Dynamites are yet to taste a defeat and will be eyeing a hat-trick of wins. They seem to be an intimidating force with a fierce batting line-up and a world-class bowling attack.

The Riders, on the other hand, are slowly aligning themselves with the track and are getting better with every game as the tournament progresses. After losing the opening encounter, they managed a narrow win in their second game. This was followed by a 9-wicket win against the Comilla Victorians. Even the Riders would have set their eye on a third consecutive win.

Based upon the observation of all the games played thus far, the Dhaka pitch seems to be a sporting wicket. It has something on offer for everyone and is all about who makes the optimal use of the conditions. The weather is sunny and the track might speed up in the second innings.

The Dynamites will look to carry on with the winning combination from the last game. With some greatest hitters of the cricket ball, their batting line-up is sure to scare any bowling attack. Also, the captain has got plenty of bowling options as most of his resources have done extremely well thus far.

The Rangpur Riders could also go into the contest with the same side. With Chris Gayle at the other end, Mehedi Maruf can play freely and take up the role of an anchor. The bowlers will have to be absolutely spot on while bowling to the Dynamites’ batemen.

The prediction is that the Dhaka Dynamites will make it a hat-trick of wins. 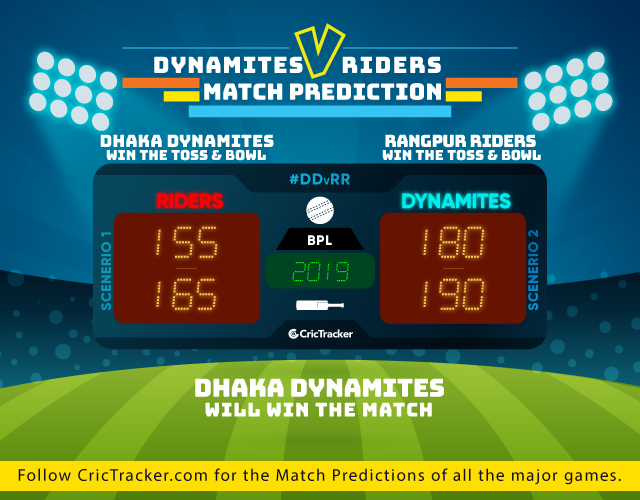