Hyderabad would want to improve on their poor record against Chennai by winning this game. The 14th match of the Indian T20 League 2020 will be played between Chennai and Hyderabad at Dubai International Cricket Stadium. We have got the best Chennai vs Hyderabad team prediction for today’s match.

Chennai vs Hyderabad Match 14 is scheduled to start at 07:30 PM IST (06:00 PM local time) (02:00 PM UTC). The game will be telecasted on the Star Sports Network (Available in English, Hindi, Telugu, Tamil, Kannada and Bengali). Also, live streaming will be available on Disney+ Hotstar.

Both Chennai and Hyderabad had a similar start of their campaign with the latter being ahead in terms of NRR. Being one of the most successful teams in the history of the tournament, Chennai hasn’t had the start they have expected. They have struggled to continue their winning momentum after the first game against Mumbai in the season opener. They are currently at the bottom on the points table with only one win in three games. Their poor intent with the bat seems to be the major reason behind their slow start in their campaign. With Faf du Plessis already doing well at number three, Chennai will get back the service of Rayudu in the middle order which may change their fortunes in upcoming matches.

On the other side, Hyderabad is one of the most balanced and consistent sides in recent years. But they started their campaign with two losses in two games. They finally managed to register their first win with the likes of Kane Williamson back in their batting order. They seem to be overdependent on their opening pair, but with Kane back in the team, their batting order looks a lot more balanced on paper. With a promising debut from Abdul Samad and a complete all-round performance with the ball, Hyderabad will be expecting their young middle order to step up and help them to take the two points in Dubai. 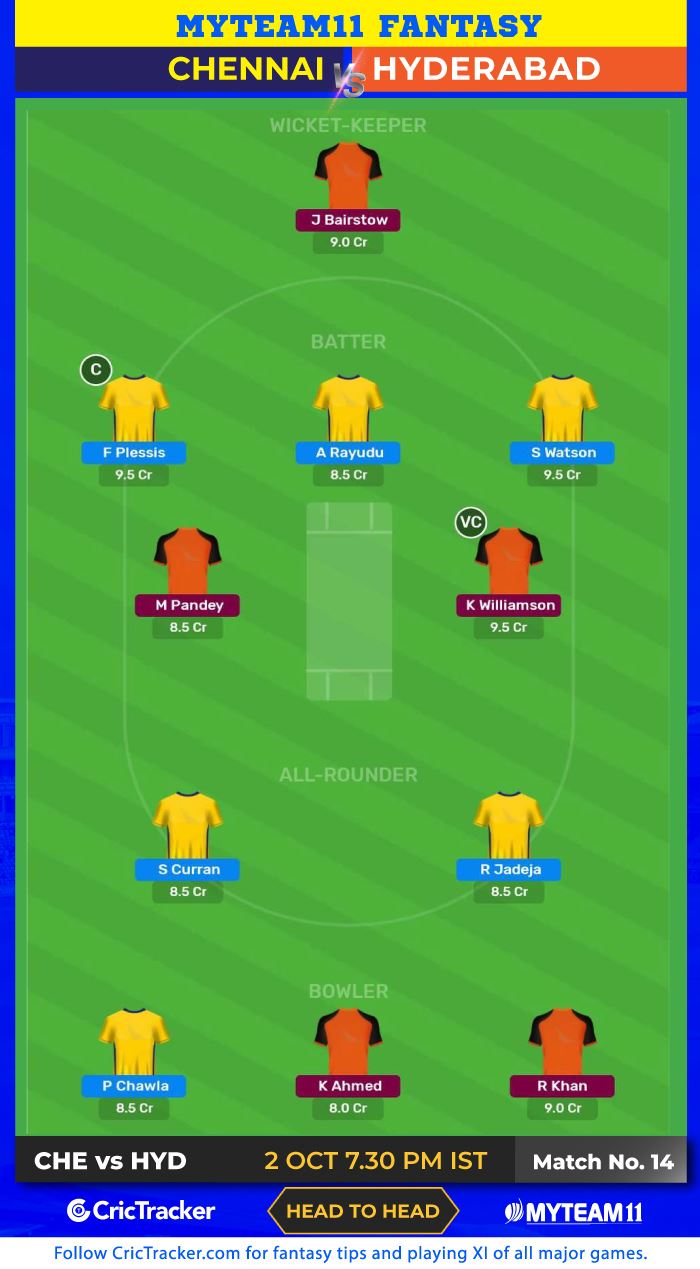 Ambati Rayudu and Dwayne Bravo recovered from their injuries and are available for Chennai in this match.

The weather forecast in Dubai shows zero chances of rain during the course of the match. The temperature will be around 33 Degree Celsius and dew factor will play a role in the second innings.

The Dubai wicket proved to be assisting both batting and bowling in the last few games. We can expect the spinners to play a key role for their team on the basis of the dimensions of the stadium. However, it is expected to be a dry and flat pitch and batting second has been difficult on this surface.

Faf du Plessis – Chennai – Faf du Plessis has been the only batsman who is scoring runs consistently for Chennai. He has played some special knocks against this opposition. This season, he is amongst the highest run-scorers in the league while maintaining an average of 86.50.

Kane Williamson – Hyderabad – Kane Williamson is the man Hyderabad batting lineup lacked in the first two games. He looked to be batting on a different surface in the last match in comparison to others. The former skipper looks to be in good touch and is surely expected to score some valuable runs on this batting paradise. He also has a strike rate of 143.2 against Chennai and an average of 42.