Mohammad Amir had derailed the Colombo Vikings the previous time the two sides met, so he makes a must-have in your team. 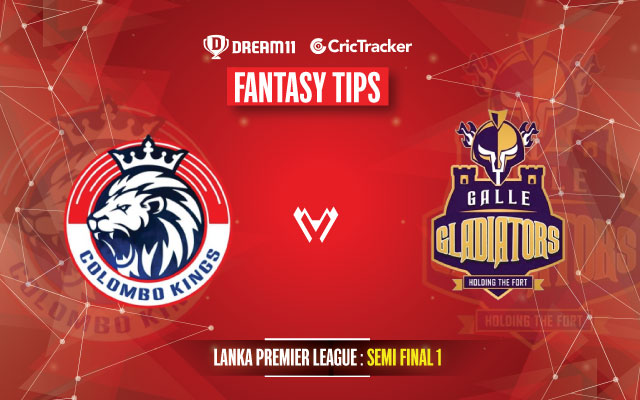 The 1st semi-final of the Lankan Premier League will be played between Colombo Kings & Galle Gladiators at the Mahinda Rajapaksa Stadium, Hambantota on Sunday, 13th December.

The live streaming of the match is scheduled to begin at 7:00 PM IST. The match will be telecast on Sony Six and can be streamed on Sony Liv.

Storming their way into the finals in the most dynamic manner, the Galle Gladiators have momentum on their side having won a previous encounter against the Colombo Kings. However, being table toppers you can expect a cracker of a fight from them coming into the knockout stage.

In the 1st encounter of the season between the 2 sides, Colombo won by 25 runs in a rain-affected match but in the 2nd encounter, the addition of Mohammad Amir helped Galle Gladiators take their revenge in style as they won by 8 wickets. Both sides are evenly balanced and it all depends on who performs their best on the day.

The venue has been exposed to rainy conditions recently but the weather on the day would be sunny and under great conditions for a full 20-over game. Chances of rain stand only 20%.

A batting wicket that prefers teams batting second. However, there has been some help for the pacers at this venue as well and with Amir doing the damage make sure you have a decent pace attack on your side.

Will be updated when there is an update

Also Read – Current World XI that can beat the No.1 T20I side England

Dhanushka Gunathilaka: Scoring at an average of 77, Gunathilaka is cruising away with runs and then some more runs in this tournament. The run machine has been in sublime touch and has been phenomenal when it comes to chasing targets or even setting up totals for the opposition.

Qais Ahmed: Scoring a brisk 50 in just 22 balls, Qais took the game completely away from the Dambulla Vikings the other night and would be riding high on confidence as he would like to continue the momentum in this game as well.

Mohammad Amir: He took 5 wickets against the Colombo Kings the last time and would look to do the same in the knockout semi-final as well. He also took 2 wickets in the previous fixture with an impressive economy of under 3 so be scared Colombo, be very scared!

Ashan Priyaranjan: Helping Qais Ahmed cruise his side into the 1st semi-final, was Ashan Priyaranjan. His impressive 47* off 28 deliveries would have boosted his confidence and might come ahead of Russell in the batting line up.

Also Read – ‘This is farcical’ – Indian pacers criticised for ‘intimidating’ tactics against Australia A’s No. 11

Will Pucovski ruled out of Australia’s opening Test against India

Mohammad Amir had derailed the Colombo Vikings the previous time the two sides met, so he makes a must-have in your team.

Galle Gladiators are expected to win the contest and make it to the final.