The Tuskers won't be having the services of Liam Plunkett and Chris Gayle, who both pulled out of the tournament.

After all the doubts over hosting the tournament, the inaugural edition of the Lanka Premier League (LPL) is set to get underway on Thursday, November 26. The opening match is set to be played between Colombo Kings and Kandy Tuskers at the Mahinda Rajapaksha Stadium International Stadium in Hambantota.

The Kings, on the other hand, aren’t short of firepower by any means. They look the stronger of the two teams on paper and would be looking for a winning start. An exciting match seems in the offing.

The pitch in Hambantota has generally been a good one for batting over the years. But since no T20 match has been played at the venue since 2013, batting second should be the way forward.

Also, because the dew factor might come into play, chasing should be the way forward. There will be five per cent chance of rain with the temperature around the 28 degrees Celsius mark.

Playing Combinations for COL vs KAN

Andre Russell didn’t have the best of campaigns in the IPL due to poor form and injury concerns. He got a couple of scores in the 20s, but couldn’t carry on. But back in March, when Russell last played in Sri Lanka, he became the Player of the Series for his brutal hitting and six-hitting series.

Not to forget the experience he brings with the ball. Dre-Russ will be one of the players to watch out for.

Kusal Mendis isn’t someone, who prefers to play the audacious strokes. The right-hander, rather, likes to play the ground shots and also believes in rotating the strike. The astonishing fact is that despite not being a brute force, he has a T20 strike-rate of 138.84.

He bats well at the top of the order and has given his teams brisk starts. He will, without a doubt, be a key play for the Tuskers. 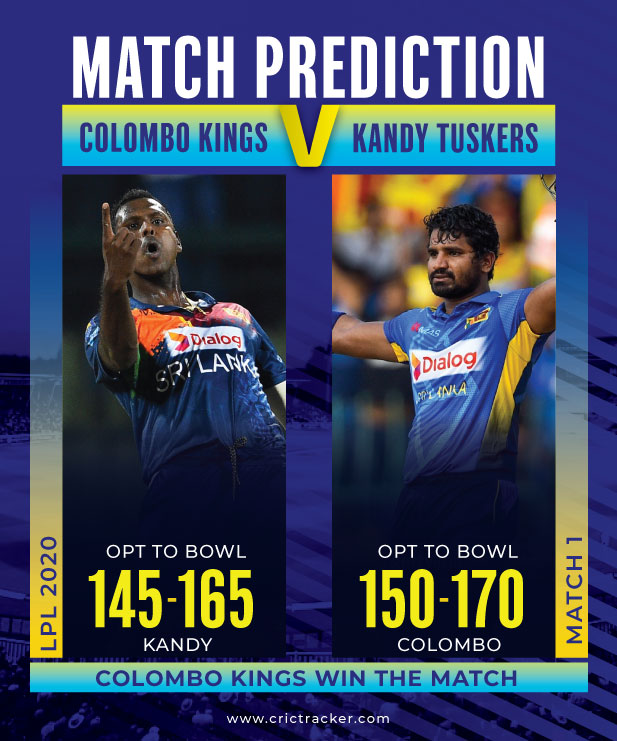