In their previous meeting, the Tallawahs snatched a stupendous victory from the jaws of defeat at Queens Park Oval.

After three consecutive victories, Jamaica Tallawahs eventually slumped to their maiden defeat in this year’s Caribbean Premier League (CPL). Their surge was halted by Guyana Amazon Warriors in Florida. Andre Russell’s men will now face Trinbago Knight Riders, who also haven’t been at their very best after their victory in the opening match against St Lucia Stars in Trinidad.

In their previous meeting, the Tallawahs snatched a stupendous victory from the jaws of defeat at Queens Park Oval. Both teams lost their previous matches and would be desperate to get back to winning ways. As far as the points table is concerned, Jamaica would love to move to the top of the table after being dethroned from the position by Shoaib Malik’s Warriors.

The track at Central Broward Regional Park Stadium Turf Ground, Lauderhill, had no demons as showed by Shimron Hetmyer. However, it also had something for the spinners, something which was on show when the likes of Imran Tahir and Chris Green bowled. Bearing in mind the sides’ powerful batting lineups another high-scoring match can be expected.

The Tallawahs are unlikely to make any change after only one defeat. The top order consisting of Kennar Lewis, Glenn Phillips, and Ross Taylor have been in decent form. David Miller needs to hit his straps at the earliest. Russell and Rovman Powell’s role will also be crucial. The bowlers did a reasonable job in the death overs against Guyana and would want to carry over their form in the next match.

The Knight Riders would want Kevon Cooper to recover and take his place in the team. Javon Searles may make way for him if the all-rounder plays. The star-studded top order yet again has to shoulder responsibility. The bowling has been a major concern for them especially with the likes of Shannon Gabriel and Dwayne Bravo conceding runs at an economy of over 11. 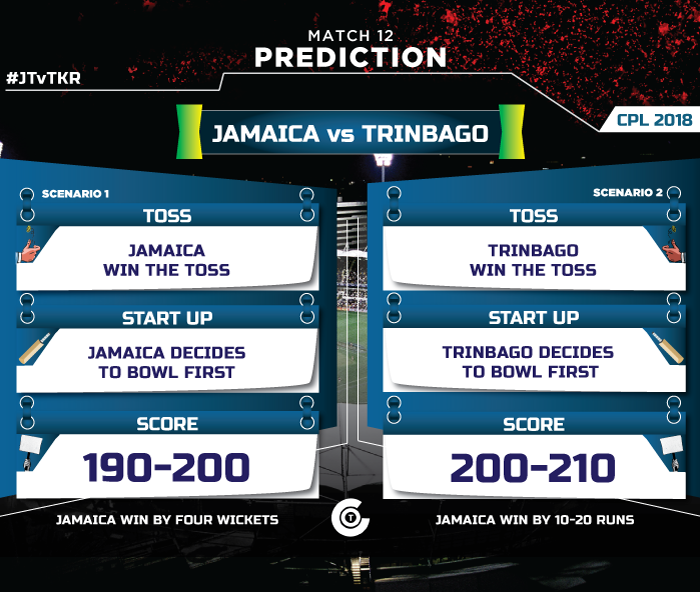