Both teams progressed to the playoffs last year.

The 2018 edition of the Caribbean Premier League (CPL) got off to a rather one-sided start as Trinbago Knight Riders, the defending champions, humbled Kieron Pollard’s St Lucia Stars BY 100 runs. St Kitts and Nevis Patriots, last year’s runners-up, and Guyana Amazon Warriors will now cross swords at Providence Stadium in Guyana. Both teams progressed to the playoffs last year, but couldn’t win the championship.

Previously, Guyana announced Pakistani all-rounder Shoaib Malik as their new skipper and would be hoping to start their campaign impressively against a team, which looks a formidable one, at least on paper. The Patriots were the team to beat even in the last season as they topped the league table and Chris Gayle and Co would be keen to replicate their performance even this time around.

The pitch is expected to be on the slower side, but with the kind of batting the teams possess, it won’t be a surprise if it turns out to be a high scoring one. Guyana has three international specialist spinners, which indicates that the track will assist the tweakers to some extent if not a whole lot. Both teams would look to bowl first after winning the toss bearing in mind their batting strength.

Luke Ronchi and Chadwick Walton are the openers followed by Gajanand Singh, who played quite a few matches for them last season. Malik is likely to come at number five. The likes of Sohail Tanvir and Keemo Paul add depth to their batting. In the bowling department, Imran Tahir and Devendra Bishoo are the spinners along with the pace trio of Tanvir, Keemo Paul and the experienced Rayad Emrit.

Chris Gayle and Evin Lewis are the opening batsmen and that speaks tons about their lineup. Mahmudullah and Devon Thomas will come at the middle-order followed by Carlos Brathwaite. Ben Cutting is no mug with the willow either. Cutting is also a seam-bowling option along with Sheldon Cottrell and Alzarri Joseph. Nepalese leg-break bowler Sandeep Lamichhane will also look to deliver.

The prediction is for St Kitts and Nevis Patriots to win the match. 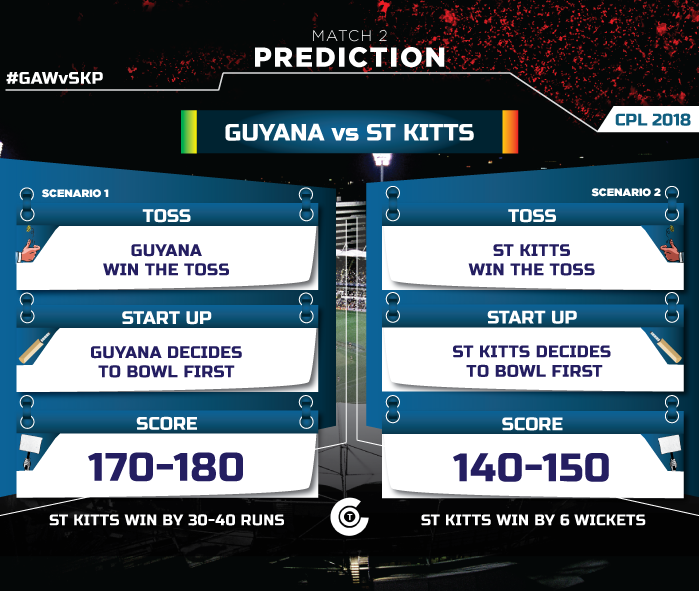