Rayad Emrit's men have the opportunity to top the table with five wins provided they manage to trump their opponent.

Barbados Tridents, owing to today’s abandoned match between St Kitts and Nevis Patriots and St Lucia Stars, have moved to the bottom of the points table. They have lost both their home matches against Jamaica Tallawahs and Trinbago Knight Riders in this season’s Caribbean Premier League (CPL) and would be keen to make a comeback against Guyana Amazon Warriors.

The Warriors, following their defeat against Kieron Pollard’s men, have come back strong and would want to strengthen their chances of qualifying for the playoffs. Moreover, Rayad Emrit’s men have the opportunity to top the table with five wins provided they manage to trump their opponent. Meanwhile, another defeat for the Tridents would definitely put the skids under the team.

The track at Kensington Oval, Bridgetown is expected to be helpful for the fast bowlers. In the last match the seamers generated prodigious pace and bounce from the wicket and it’s not expected to behave any differently in the next encounter as well. Both sides have the fast-bowling department covered. Teams are most likely to bowl first after winning the toss.

The Tridents, bearing in mind the nature of the strip, may bring in Raymon Reifer in place of Imran Khan. Mohammad Irfan and Wahab Riaz remain as their gun bowlers. Chemar Holder is likely to retain his place in the eleven. Hashim Amla and Martin Guptill will have the onus to get the team off to a good start. The likes of Steve Smith and Jason Holder will also need to step up.

The Warriors won’t want to tinker with their winning combination. Chadwick Walton and Luke Ronchi are the openers. Shimron Hetmyer and Jason Mohammed are slated to come in at number three and four. In the bowling lineup, it will be interesting to see how Keemo Paul and Sohail Tanvir bowl. The spin duo of Imran Tahir and Chris Green have also done well thus far. 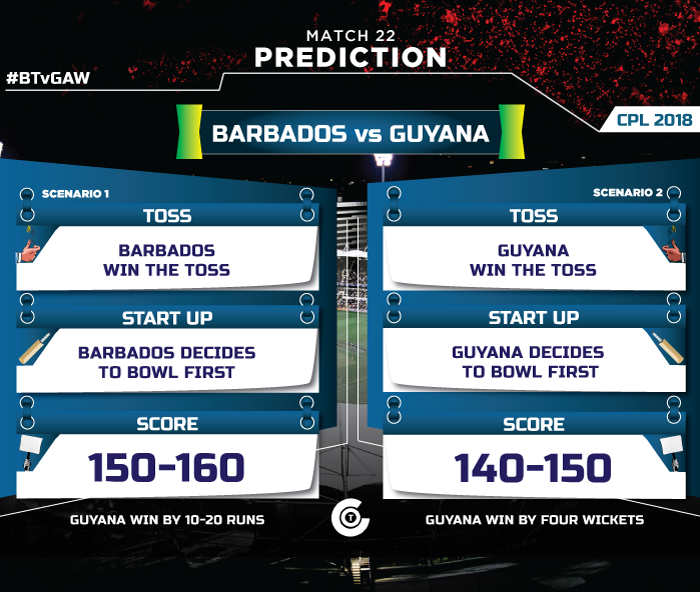