The Warriors will cement their position in the top two provided they manage to beat the Andre Russell-led Tallawahs.

Both Guyana Amazon Warriors and Jamaica Tallawahs have already qualified for the playoffs of this year’s Caribbean Premier League (CPL). However, both teams have incentives to achieve as one of the top two spots are up for grabs. The Warriors will cement their position in the top two provided they manage to beat the Andre Russell-led Tallawahs in the next encounter in Guyana.

For the Tallawahs, the road is a tad more tricky. First and foremost they need to win their upcoming encounter. Thereafter, they have to hope for the Warriors to roll over Trinbago Knight Riders in the final match of the league stage in order for them to secure their place in the top two. Moreover, the visitors would be keen to avenge their defeat from the previous match in Lauderhill.

The pitch at Providence Stadium hasn’t been a belter of a wicket in the three matches played thus far. The spinners have had their say and both teams have quality tweakers in their armoury. Both teams would first want for the spinners to strangle the opposition batters and then for their batsmen to unleash their wide array of strokes on a decent batting wicket.

The Warriors will stick to the same lineup. Chadwick Walton and Luke Ronchi are the opening batsmen. Shimron Hetmyer, their leading run scorer, will need to come to the party. Jason Mohammed and Cameron Delport’s role lower down the order will also be important. Romario Shepherd is likely to be persisted with. Imran Tahir and Sohail Tanvir are the other batsmen they will bank on.

The Tallawahs is likely to rope in Ish Sodhi for Adam Zampa, who won’t be a part of the team from the next match. The opening pair in Glenn Phillips and Johnson Charles have done well and they will have to step. The middle-order is an explosive one with the likes of Rovman Powell, Andre Russell and David Miller in the ranks. Russell along with Oshane Thomas will also be key in the bowling lineup. 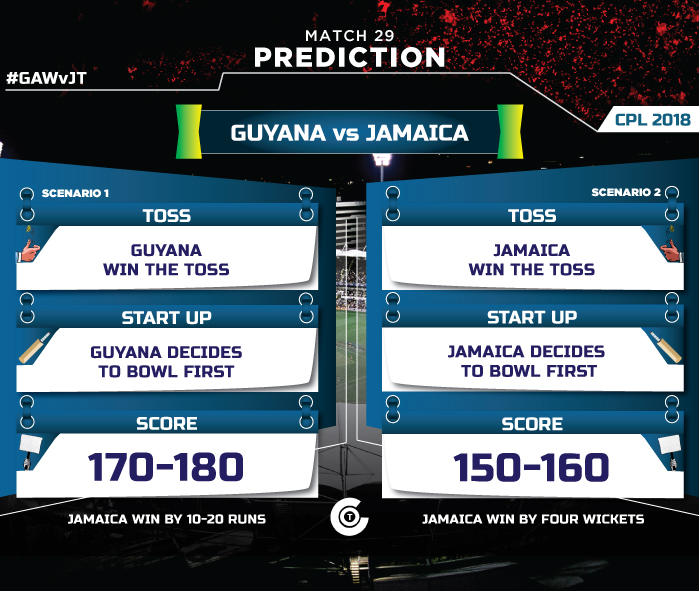