The Tallawahs can take heart from the fact that they beat the Knights in Trinidad in the previous season.

The Trinbago Knight Riders got off to a resounding start in this edition’s Caribbean Premier League (CPL). Most importantly, they looked a class apart and yet again have put themselves forth as one of the strong contenders to win the title. Their upcoming encounter is against the Andre Russell-captained Jamaica Tallawahs, who had a topsy-turvy season last time around.

In 2017, Jamaica finished fourth in the points table and bowed out after their Eliminator-defeat against Guyana Amazon Warriors. The Tallawahs can take heart from the fact that they beat the Knights at the Queens Park Oval in Trinidad in the previous season. On the other hand, Dwayne Bravo and Co would be keen to string together another victory to maintain their dominance in the tournament.

The spinners, including the likes of Fawad Ahmed and Sunil Narine, were effective on the same strip, which isn’t expected to alter much in the next match as well. TKR has a formidable bowling lineup and the Tallawahs most probably won’t want to chase. Therefore, both teams would want to bat first and then strangle their opposition with their respective spin attacks.

The Knights aren’t expected to make any changes to their lineup. Chris Lynn and Sunil Narine would want to shine at the top of the order. The New Zealand-duo of Munro and McCullum would also wish to contribute with the willow. Fawad Ahmed and Narine were excellent with the leather and the onus would also be on them to restrict the Tallawahs’ batting lineup.

Glenn Phillips, who was impressive in the last season for Russell’s men, should be the opener along with Johnson Charles. The skipper comes in at number six with Imad Wasim to follow. Hence, their batting isn’t short of firepower by any means. The spin trio of Adam Zampa and Samuel Badree and Wasim will also have their roles to play. Moreover, Roach and Santokie would need to shoulder responsibility.

The prediction is for Trinbago Knight Riders to win back-to-back matches and stay atop the points table. 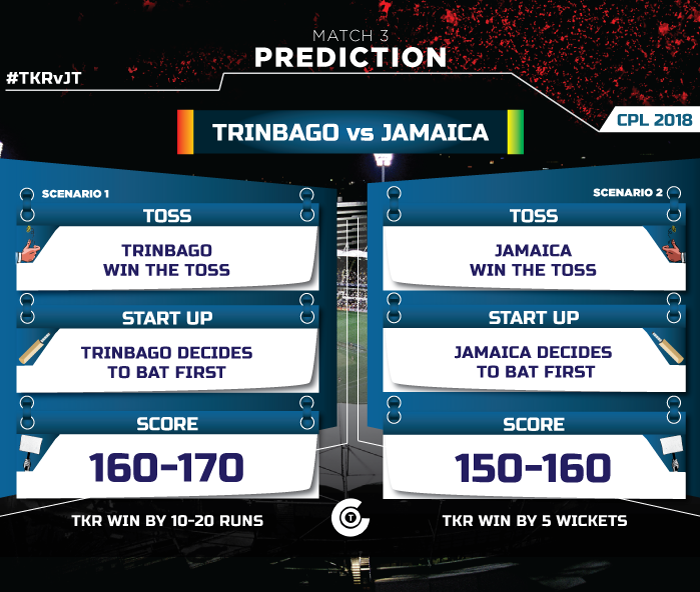