Colin Munro is set to play his first match of the CPL 2019.

The 10th game of the Caribbean Premier League (CPL) 2019 will be played between Jamaica Tallawahs and Trinbago Knight Riders at the Sabina Park in Kingston, Jamaica.

Jamaica Tallawahs are the only team to open their points tally till date as they suffered defeats in all three matches they played thus far. The Tallawahs hoped that the home-leg matches will bring change to the fortunes after losing their first two matches. However, they ended up on the wrong side once against as the St Lucia Zouks chased down the target of 171 as the openers Rahkeem Cornwall (75) and Andre Fletcher (47*) added 111 in only 8.4 overs.

Their bowling has been miserable as they conceded at a rate of 9.5 and more in all the three matches. The Tallawahs even lost while defending 242, the 2nd biggest chase in the T20 history. Their 2nd home game will be against the defending champions Trinbago Knight Riders who won all three matches in this season. Jamaica franchise played their first game of the season against TKR only where they fell 22 runs short in a big chase.

The forecast weather for Friday is much better than on Thursday. The skies are to be clear throughout the day and high temperatures are expected. There are chances of the showers and drizzle in the afternoon but could disappear by the start of the match.

Once again, the team batting first finishes with 170 at the Kingston’s Sabina Park. However, the hosts were set towards 220 at halfway stage but the injury to Andre Russell and lack of depth cost them at least 30 runs. Despite the short straight boundaries, chasing a big target might not be easy at this venue. The team batting first will surely aim 200 as a winning score.

Andre Russell suffered a blow on the head and is likely to miss the game on Friday.

Darren Bravo is cleared to play after suffering recently concussion during the Test series against India.

The conditions at the Sabina Park on Friday were similar to that of Auckland’s Eden Park. Both the venues have the short straight boundaries and pitches are pace-friendly. Glenn Phillips, who plays for Auckland, batted brilliantly in the familiar conditions. Colin Munro, another player from Auckland, could well do a good job with the bat. Rovman Powell will have added responsibility in the middle-order in the absence of Andre Russell.

James Neesham will be crucial as captain or vice-captain in the new points system of Dream11. 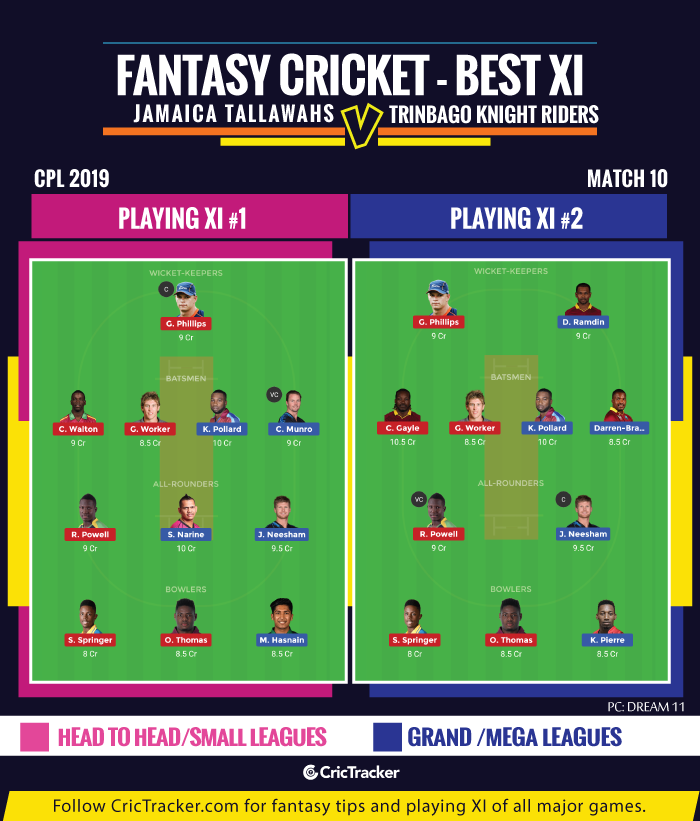 As expected, Chris Gayle failed against St Lucia Zouks who have some good pacers in their line-up. He is likely to record another failure. Muhammad Hasnain and Ali Khan have enough pace to rattle the veteran.

Disappointment could continue for the Jamaica Tallawahs with Trinbago Knight Riders bagging their 4th consecutive win.