Laurie Evans scored more than 40 runs in each of his last five T20 innings.

The 11th game of the Caribbean Premier League (CPL) 2019 will be played between St Kitts and Nevis Patriots and Guyana Amazon Warriors at the Warner Park in Basseterre, St Kitts.

St Kitts and Nevis Patriots managed to win only one of their four matches and that one win came when they recorded the 2nd highest successful T20I run-chase. They chased down 242 against the Jamaica Tallawahs but lost to Barbados Tridents chasing 187 on the very next day. They will be hopeful of their in-form top three Evin Lewis, Laurie Evans and Devon Thomas delivering in these high run-chases.

The SKN Patriots’ bowling hasn’t been top-notch in the absence of Sheldon Cottrell. They will be up against Guyana Amazon Warriors who are a more balanced side. The Amazon Warriors have won all the three matches they played and are placed behind the defending champions Trinbago Knight Riders in the points table. They have the bowling that could work on the high-scoring venues of the competition.

The first two matches of the season at the Warner Park didn’t see any interruptions. However, the game on Saturday will have a threat from rain. 30-40% chances of rain are expected from 6 PM local time; one hour prior to the start of the match.

The Warner Park in Basseterre produced two high-scoring matches earlier this week including the 2nd highest T20 chase ever. The venue could witness another run-fest and the short boundaries help the cause for the batsmen.

There is no update on why Sheldon Cottrell didn’t play the previous two matches.

Imran Tahir replaces Shadab Khan while Qais Ahmed has joined the team after the one-off Test match against Bangladesh.

Laurie Evans scored more than 40 runs in each of his last five T20 innings and will hope to continue his form. Chandrapaul Hemraj could end up bowling few overs if the pitch grips a bit which will increase his fantasy potential. Fabian Allen has three 30+ scores from four matches in this season.

Evin Lewis could come out good against Guyana who is filled by spinners. He could be a perfect choice as captain or vice-captain for this match. 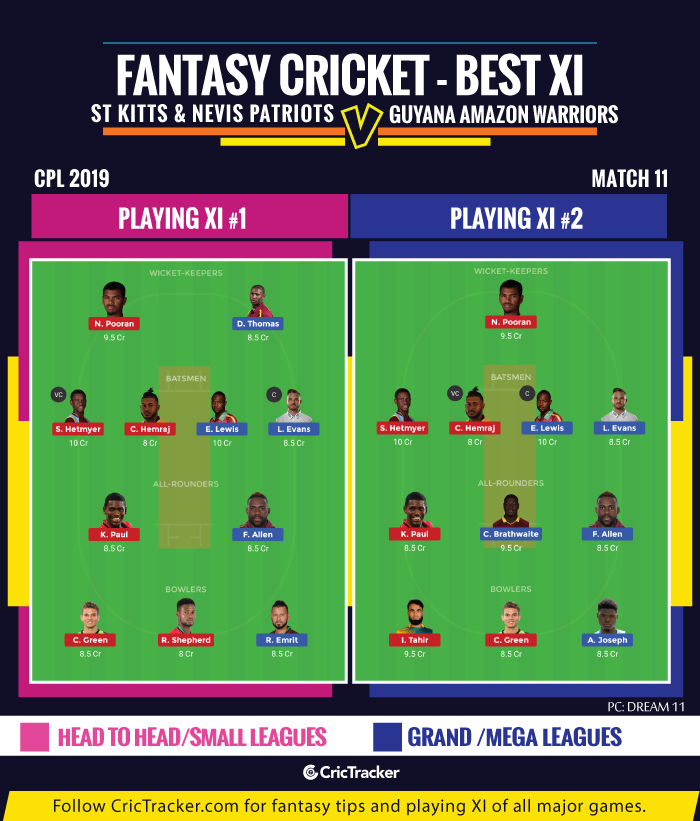 Given the chances of a high-scoring match, the likes of Laurie Evans, Evin Lewis, Chandrapaul Hemraj and Shimron Hetmyer are a must from batsmen’s category. Captain and vice-captain can be picked among these four players.

The SKN Patriots will have a chance in this game only if they are chasing.