Glenn Phillips has performed well with the bat in all matches at the Sabina Park.

The 15th game of the Caribbean Premier League (CPL) 2019 will be played between Jamaica Tallawahs and Guyana Amazon Warriors at the Sabina Park in Kingston, Jamaica.

Jamaica Tallawahs finally got a chance to witness a couple of points in their tally in the CPL 2019. They defeated the Barbados Tridents on Sunday afternoon at their home ground. The Tallawahs will play two home matches in two matches and will finish off their five home matches. With one win after five matches, the Jamaica franchise can’t take things lightly if they want to make through to the playoffs.

They will be now hosting the Guyana Amazon Warriors who have won all the four games they played thus far. The Guyana franchise has got a top-order that could smash any sort of bowling line-up. On the other hand, their bowling attack comprises of spin bowlers. Their performances would be the make or break in this game due to shorter straight boundaries and the chances of this match being a high-scoring one.

Sabina Park might receive a decent amount of rain over the next week. Scattered thunderstorms are expected on Wednesday. However, the highest possibility of rain is during the afternoon and things could settle down by 7 PM which is the scheduled start of play.

After two high-scoring matches, the Sabina Park witnessed a low-scoring match. However, it was played during the day time. During the night matches, the dew quickens up the track and also makes it tough for the bowlers to grip the ball. Hence, we could be in for another run-fest in Kingston.

Andre Russell suffered a blow on the head and Jermaine Blackwood has been named as temporary cover.

The Afghanistan wrist spinners Qais Ahmad and Zahir Khan had a brilliant last match and are likely to be among top bowlers in the game on Wednesday. Chandrapaul Hemraj’s fantasy potential is quite high as he bowls a couple of overs when needed. George Worker could get a chance to bowl more after taking two wickets in the last match.

Glenn Phillips is a safe option as captain or vice-captain for all the matches to be played at the Sabina Park. 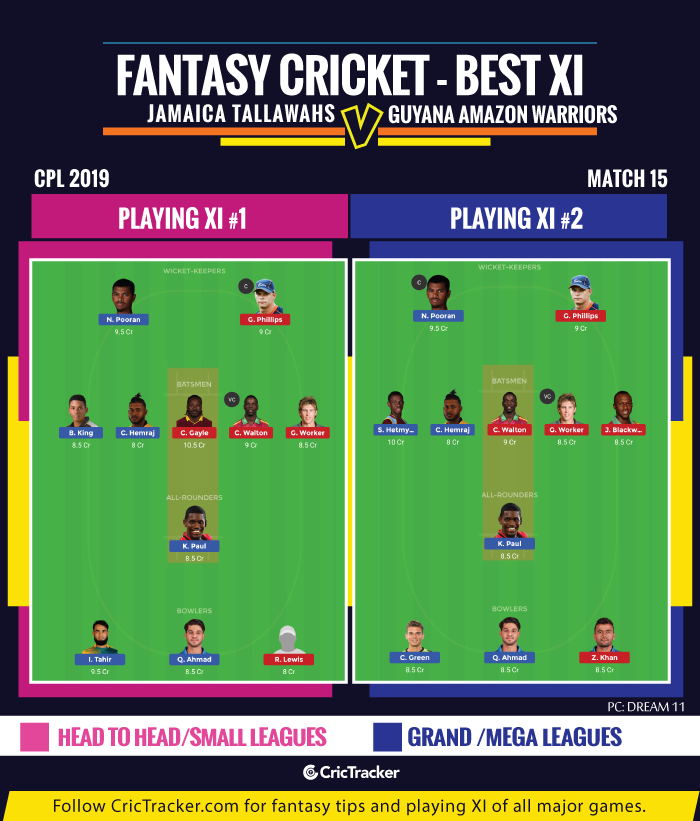 Across the three matches, this venue has hosted, the majority of wickets went to the leg-spinners. As many as three wrist spinners are part of this game and they have to be given the first preference.

Jamaica Tallawahs could hand the first defeat to Guyana Amazon Warriors after the revamp to their bowling line-up.