Both sides have got top-orders in blazing form.

The 19th match of the Caribbean Premier League (CPL) 2019 will be played between Guyana Amazon Warriors and Barbados Tridents at the Kensington Oval in Barbados.

The caravan of the 2019 Caribbean Premier League moves to the Kensington Oval in Barbados where the Tridents play hosts to table-toppers Guyana Amazon Warriors. With five victories in as many games, the Warriors have been a ruthless force in this tournament thus far. They come into this game riding on an 81-run win over Jamaica Tallahwahs and will be hoping to do an encore when they meet the Tridents on Sunday.

Their opponents, on the other hand, have had a mixed tournament thus far, having won just two and the lost two. One of those defeats came at the hands of their Sunday’s opponent when they were bowled out for 133 while chasing the target of 181. Will they avenge their defeat? Or will the Warriors juggernaut continue?

After a rain-affected washed out game in St Lucia yesterday, inclement weather can continue to play spoilsport tomorrow as well. Rain showers are expected in Barbados with temperature ranging around 28 degrees.

As we have seen throughout the tournament, the pitch at the Kensington Oval is once again expected to be flat and safe heaven for the batters. However, with a bit of rain around, fast bowlers could also have a say in the proceedings.

Barbados Tridents: The top-order comprising of Johnson Charles (28), Justin Greaves (57), JP Duminy (18) and all-round display from Jonathan Carter (30 runs + 1 catch + 1 run-out) played a pivotal role in their side’s 71-run win over St Lucia. They will have to better their performance if they are to upset the table-toppers. Jason Holder (2-24) and Joshua Bishop (2-33) will spearhead the bowling unit.

Guyana Amazon Warriors: Brandon King (59), Shimron Hetmayer (44) and skipper Shoaib Malik have been in top-notch form in the past few games. They, along with Nicholas Pooran, who scored a 30-ball-61, the last time these two sides met, will be the spearheads with the bat.

Imran Tahir (2-21), Qais Ahmed (2-32) and Keemo Paul (3-34) were the leading wicket-takers in the last game against Jamaica Tallawahs. They will once again hold the key tomorrow. 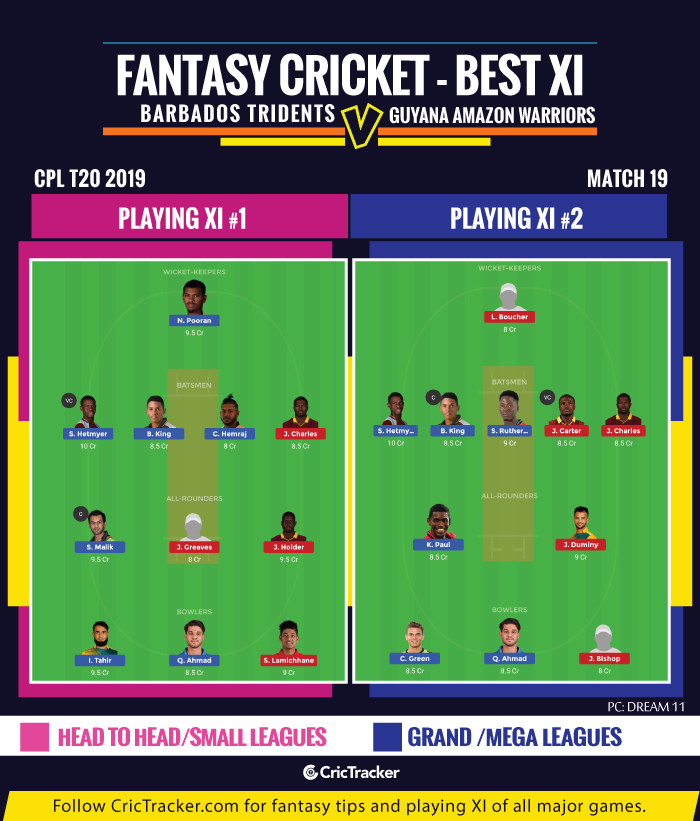 Both sides have got top-orders in blazing form. Thus opting for more of the top-order batters and designating them as captain/vice-captain could be a prudent punt.