In the last six CPL matches at the Kensington Oval, the chasing teams have won.

The Jamaica Tallawahs are going absolutely nowhere in the ongoing edition of the CPL. Having lost six out of their seven matches, the Chadwick Walton-led unit is languishing at the bottom of the points table. TKR and the Warriors already out their reach, and it’s tough for them to overtake the Patriots as well. In order for a berth in the playoffs, their competition is with Barbados Tridents.

In fact, their next home match over the Tridents will literally decide if the Tallawahs stay alive in the competition or not. Their Net Run Rate of -1.487 isn’t helping their cause either. The team can take heart from the fact that their only victory in the league came versus the Tridents at the Sabina Park. Meanwhile, Barbados would want to make amends after the defeat against Shoaib Malik’s Warriors.

The pitch won’t be a belter and runs are expected to be tough to get. The spinners are likely to come into play yet again. In the last six CPL matches at the Kensington Oval, the chasing teams have come out trumps every other time. Also, with chances of rain around, sides would be better of fielding first. There will be a significant amount of dew in the second half, making batting much easier.

The Tridents can opt to bring in Hayden Walsh in place of Raymon Reifer to strengthen their spin attack. Alex Hales has been getting the starts, but is yet to convert any of them. He made a comeback after missing one game. Johnson Charles has looked threatening at the top, but is yet to completely find his rhythm. JP Duminy has been their standout batter, having scored 150 runs.

Leniko Boucher has been batting lower down the order for the last couple of games, which is bit of a surprise. Ashley Nurse has been providing the impetus with the bat, though he is yet to get amongst the wickets. Jason Holder will hold the key with the ball, being their leading wicket-taker. Sandeep Lamichhane’s role on a slow deck will be critical. Lalor needs to make some breakthroughs as well.

Worker did well against the Tridents last time and he might make his way back into the team. Christopher Lamont won’t be a bad inclusion as the opponent don’t have a whole lot of left-handers. Springer could be given a rest. Zahir got a three-fer versus Barbados last time around, and the chinaman would be hoping for a similar show. Dernbach’s slower balls need to come handy.

Andre Russell has blown a tad hot and cold, but he remains a key member if the Tallawahs are to win their second match. He bagged a golden duck in the last match. Glenn Phillips has been their best bet with the bat, having racked up 289 runs with a strike-rate of 157.06. Apart from his century over the Patriots, Chris Gayle has strained a wee bit. The onus will also be on skipper Walton. 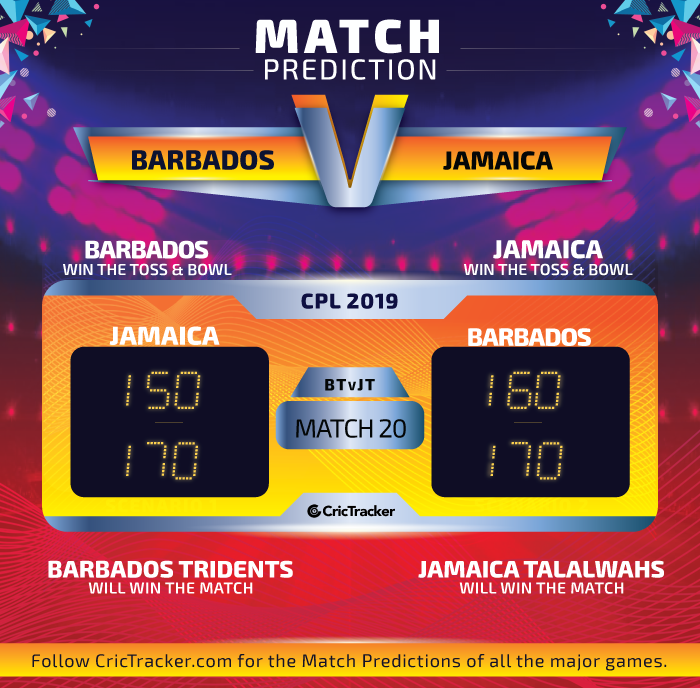