Shimron Hetmyer’s ability to tackle the spin threat of St Lucia Zouks holds him in good stead over Colin Ingram and is picked as captain.

The Match 22 of the Caribbean Premier League 2019 between St Lucia Zouks and Guyana Amazon Warriors will be hosted by Darren Sammy National Cricket Stadium, St Lucia

With only a handful of games left in the Caribbean Premier League 2019, time is running out for St Lucia Zouks to make it to the playoffs. In their bid for a win, they face a stern test in the form of Guyana Amazon Warriors. The only unbeaten side in this year’s competition, Guyana has already assured off a knockout spot. Riding on Brandon King’s sensational performances, Guyana sits at the top of the points table.

Another reason behind Guyana is their bowling unit. They have bowled out opponents in their last four matches although they come across Colin Ingram and Andre Fletcher in St Lucia. With the home side desperately in need for a win, it has to be seen if inspirational captain, Darren Sammy pulls a rabbit out of the hat against hot favourites, Guyana.

As per the weather report, it is expected to be a clear day at St Lucia with temperatures hovering around 28-29 degrees and humidity at 77 percent. Although there is a small threat of rain, the match should be completed by the look of things

The pitch at St Lucia should favour strokeplay with another high-scoring match on the cards in CPL 2019. With the town experiencing some rain over the past week, the pitch could be a touch slower than usual. Chasing is the preferred option here and should be no different in this game as well

Shimron Hetmyer was one of the breakout stars of CPL 2018 with 440 runs. Although he did start this season in fine form, Hetmyer has faded off late. Expect him to fire on what is a good pitch to bat on against the Zouks.

Imran Tahir has six wickets to his name in just three outings for Guyana. His economy rate also stands out as he concedes only five runs per over with his leg-spin.

Colin Ingram replaced Thisara Perera in the middle of the tournament but did get going in the washed-out game against Trinbago Knight Riders. Nevertheless, it did stamp his authority over the opposition with his quickfire knock and should be no different against the table-toppers, Guyana.

Shimron Hetmyer’s ability to tackle the spin threat of St Lucia Zouks holds him in good stead over Colin Ingram and is picked as captain. 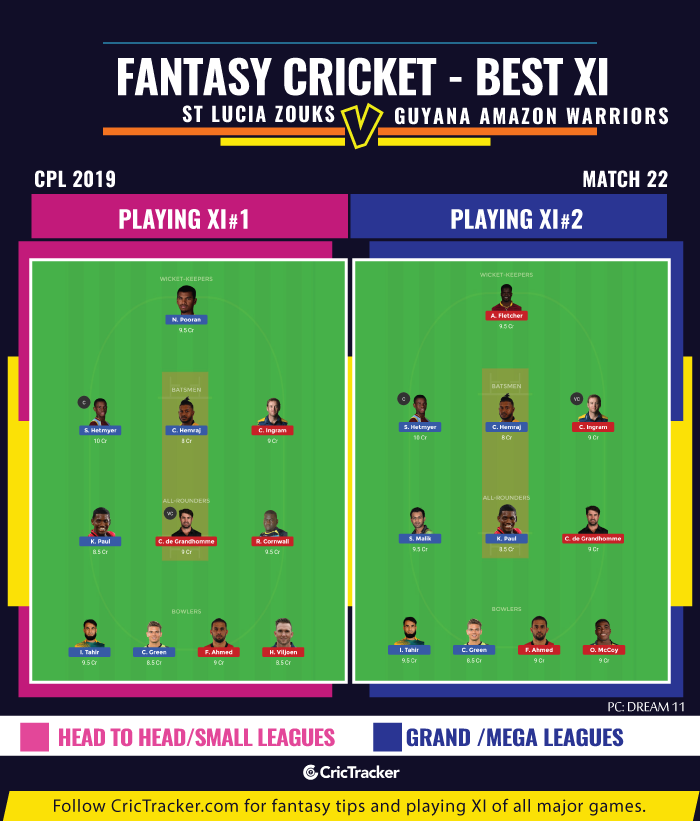 With this being a high-scoring pitch, top-order batsmen and finishers are crucial and could prove to be viable punts.

Guyana Amazon Warriors has a strong and balanced side which should prove to be too much for Darren Sammy’s St Lucia Zouks.