Spinners are a safe choice for this game with the likes of Chris Green and Hayden Walsh available for reasonable prices.

Qualifier 1 of the Caribbean Premier League 2019 between Guyana Amazon Warriors and Barbados Tridents will be hosted by Providence Ground, Guyana.

After thirty league games in CPL 2019, Guyana Amazon Warriors has stood out as the team to beat. With a perfect record, Guyana head into the Qualifier with immense confidence as they face Barbados Tridents at the Providence Stadium in Guyana. Like the Warriors, Barbados is also in decent form with three wins from their last four games.

The arrivals of Harry Gurney and Shakib Al Hasan, midway through the season has transformed them into a formidable side. Although they did have Guyana to thank for their second-place finish in the points table, Barbados Tridents match their opponents in both departments with the likes of JP Duminy and Johnson Charles starring for them.

Comforted by home conditions, Guyana will against consider themselves as the favourites although this time around Barbados look to put in a stronger fight than they did the last time they were in Guyana.

Barbados couldn’t withstand the brute power of Nicolas Pooran and Sherfane Rutherford as they succumbed to a rampant Guyana Amazon Warriors side by 47 runs. It was early days in CPL 2019 with a lot changing over the course of the tournament. In Hayden Walsh, Barbados has the league’s highest wicket-taker with seventeen wickets.

In comparison, Guyana also possesses a couple of spin bowling options in Tahir and Green, who have 26 wickets among themselves this season. All in all, a mouth-watering clash awaits between the two sides with a place in the final on the line on Sunday.

With this being an afternoon game, temperatures range from 30-32 degrees Celsius. There is a threat of rain during the match although a match should be completed in all likelihood. The wind is slated to blow from one end at 17 km/hr while the cloud cover averages 16% throughout the game, according to AccuWeather

The pitch at the Providence Ground is on the slower side with the spinners being the key on such surfaces. The relatively short boundaries could go against the spinners and level the field for the batsmen. Setting a target would be the preferred option upon winning the toss for the winning captain.

Shakib Al Hasan provides the balance in the side with his left-arm spin. His ability to play spin well should serve him well. Shimron Hetmyer has scored only 212 runs this season but has a great record at his home ground. Similar to Hetmyer, Hales hasn’t had a great CPL 2019 but a player of his caliber cannot be ignored in a match of such magnitude 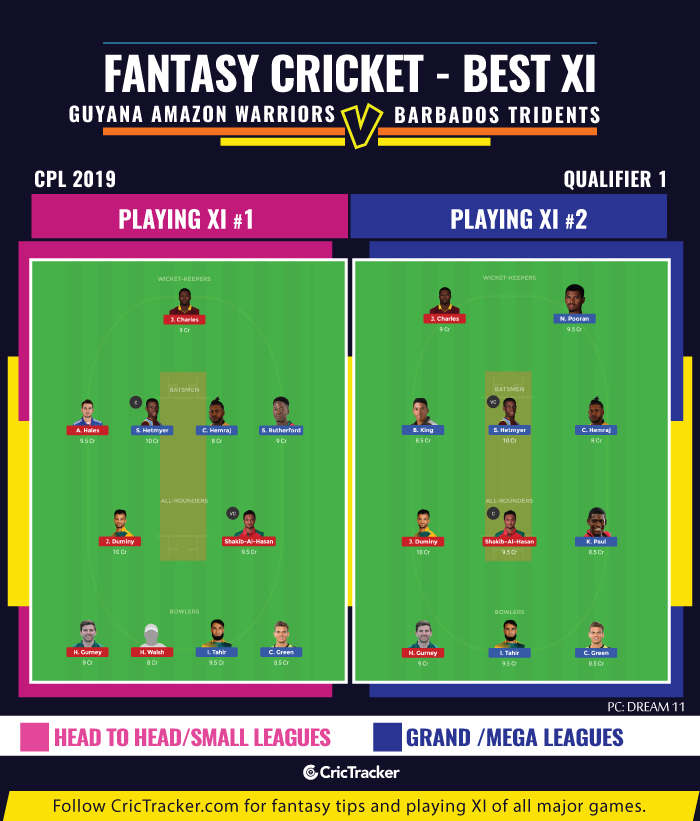 Spinners are a safe choice for this game with the likes of Chris Green and Hayden Walsh available for reasonable prices.

Middle-order batsmen have performed better in recent games at the ground. JP Duminy would be an ideal choice considering his ease in facing spin.