Zouks defeated Warriors by 10 runs in their first meeting this year, whereas the second time Warriors slammed them by 7 wickets.

The second semi-final of the CPL 2020 is marked between Guyana Amazon Warriors and St Lucia Zouks, on 9th  September, at the Brian Lara Cricket Stadium in Trinidad. Unlike the clash of the first semi-final, this one is a top-notch battle between two strong and evenly placed teams in terms of points. Though the Zouks are placed third on the table, they have registered the exact number of wins as the Warriors and the two teams are only separated by the virtue of the net run rate.

The Zouks are coming to play this match after posting a victory over the Jamaica Tallawahs in their last league encounter. There have been a number of positives for them this year, especially in their middle-order where Roston Chase, Mohammad Nabi, and Najibullah Zadran, have consistently performed and contributed in their wins. Youngster Mark Deyal has played his role quite well at No.3, however, the opening combination of the team has not looked settled.

On the other hand, the Warriors have ensured to learn from their mistakes and have tried different things over the course of the tournament. They have given their players ample chance and have managed the team and bench quite well. Much like their opponents, their top-order has also struggled throughout the tournament, however, the likes of Nicholas Pooran, Ross Taylor, and their star performer Shimron Hetmyer have dragged their team through to the semi-finals.

These are two teams with quite similar fates this year and they have had their highs and lows. Their performance against each other has also been even as Zouks defeated Warriors by 10 runs in their first meeting this year, whereas the second time Warriors slammed them by 7 wickets. All in all, this one is going to be some real clash.

The spinners have had a bash in the tournament and the second semi-final being the second encounter of the day, will have something good in store for them again. The night games have witnessed quite unreasonably low scores and the batsmen will need to be cautious in their approach at the start.

The openers Brandon King and Chandrapaul Hemraj have not been able to provide even a single promising start to their team this year and they would desperately want to make it count in the all-important knockout clash today. The middle-order for the Warriors looks extremely strong with the likes of in-form Shimron Hetmyer, Nicholas Pooran, and Ross Taylor featuring in it.

Keemo Paul should certainly play ahead of Shane Rutherford, who has had an underwhelming run this year. Skipper Chris Green has been in decent form whereas Naveen-ul-Haq and Imran Tahir have constantly bagged wickets too.

The Zouks have tried various combinations in their top-order after their regular openers Rahkeem Cornwall and Andre Fletcher have not been able to fire at the top. The strategy of bringing in Mark Deyal at the top has seemed to work for them and they might continue with it in this game as well. Their middle-order batsmen Roston Chase, Najibullah Zadran, and Mohammad Nabi have done the bulk of their scoring, and Chase and Nabi have also contributed thoroughly with the ball.

Javelle Glen has performed well in the past few outings and he is expected to play alongside skipper Darren Sammy in the lower-middle order. Scott Kuggeleijn and Kesrick Williams have been in form too and have picked up wickets constantly, however, their economies have been a slight concern at times. 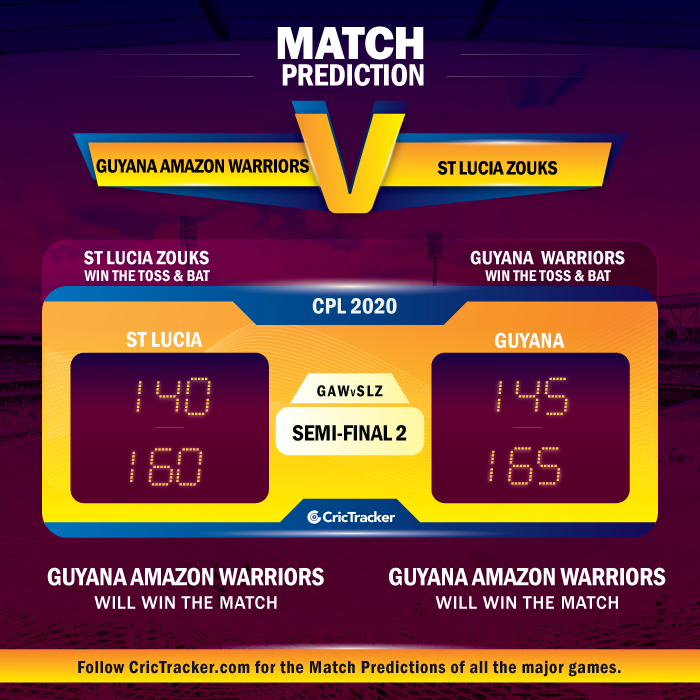