A team entering the final with 11 wins on their back will be a no-brainer favorite, but the Riders will know that the Zouks cannot be kept out of the hunt as easily.

It is show time in the Caribbean Islands! After 32 tussles, challenges, and face-offs, it has all bottled down to one final clash. What the two teams have done in the league is relevant no more. The Trinbago Knights Riders will lock horns with St Lucia Zouks in the 33rd and final match of CPL 2020, on 10th September, at the Brian Lara Cricket Stadium in Trinidad.

The three-time champs Trinbago Knight Riders have been utterly consistent over the years. They have never failed to make a spot in the top-four in the history of the league and have ended up as the table-toppers in three of the last four seasons. Their run this year has been nothing short of a dream, with a whopping 11 victories in as many games!  A win tonight for the Riders will make them the owners of a feat never achieved in the CPL history: undefeated champions. The Riders have been right on the money from the inception this year.

They have quite often missed the services of their big guns owing to injuries. But an absent Sunil Narine’s problem has been addressed by other spinners in Sikandar Raza, Khary Pierre, Akeal Hossein, and the 48-year old Pravin Tambe. Tion Webster and Tim Seifert have made up the absence of Colin Munro. Lendl Simmons, Fawad Ahmed, and Kieron Pollard have had their moments too. Each player has taken up the cause for the team and has played responsible cricket.

Facing them off are St Lucia Zouks who have not been anywhere close to the consistency of the Knight Riders in the past. The playoff appearance against Guyana Amazon Warriors was their second time in eight seasons whereas today’s game is their maiden final entrance in the league. No team has been as consistent as the Riders this year, however, the Zouks have highlighted their brilliance with the likes of Roston Chase, Mohammad Nabi, and Najibullah Zadran shining for them.

The team has created moments for themselves by their inspirational performances and has won matches out of insane positions. Then be it defending 92 against Barbados Tridents, choking the once-cruising Jamaica Tallawahs to defeat during a chase of 145, or tumbling out the Warriors for the second-lowest total on the history of the league to seal the deal for the final. Strange things have happened in the tournament, not just this year. A team entering the final with 11 wins on their back will be a no-brainer favorite, but the Riders will know that the Zouks cannot be kept out of the hunt as easily.

Spinners will be looking greedily towards the hunting the batsmen again on the track full of stuff for them. This being a day encounter, a slightly higher scoring game can be expected as that has been the strange case this year. There is an expectation of slight rain but nothing serious enough to shorten the game.

Sunil Narine and Lendl Simmons will be seen at the top, whereas in Colin Munro’s absence, the duty at No. 3 will rest in the hands of Tion Webster. Tim Seifert and the two big West Indians: Darren Bravo and Kieron Pollard – none of whom were required to bat in the semi-final clash courtesy Simmons and Webster’s knocks in a simple chase of 111 – will form the middle-order along with Dwayne Bravo.

The Man-of-the-Match awardee for his 3 for 14, Akeal Hosein, will be alongside other spinners- Fawad Ahmed, Khary Pierre, and Sunil Narine. The pacers did not have much to show in the semi-final clash as both Bravo and Ali Khan went wicket-less, however, the former looked in great control during his frugal spell with the ball.

The Zouks were spot on in their knockout clash against the Tallawahs as they completely dominated the proceedings throughout the length of the game. Rahkeem Cornwall and Mark Deyal will open the proceedings followed by Andre Fletcher at No. 3. The middle-order for the Zouks has been the center of attraction with Roston Chase, Najibullah Zadran, and Mohammad Nabi giving consistent performances.

With the likes of Chase, Nabi, Deyal, Javelle Glen, and Zaheer Khan, their spin unit looks as brilliant as any in the tournament. Scott Kuggeleijn and Kesrick Williams have been consistently in the wickets and all of their bowlers contributed to Tallawahs’ collapse in the last game and therefore, the same eleven is expected.

Live Streaming– The match can be streamed online on Fan Code.

The prediction is for Trinbago Knight Riders to win the match 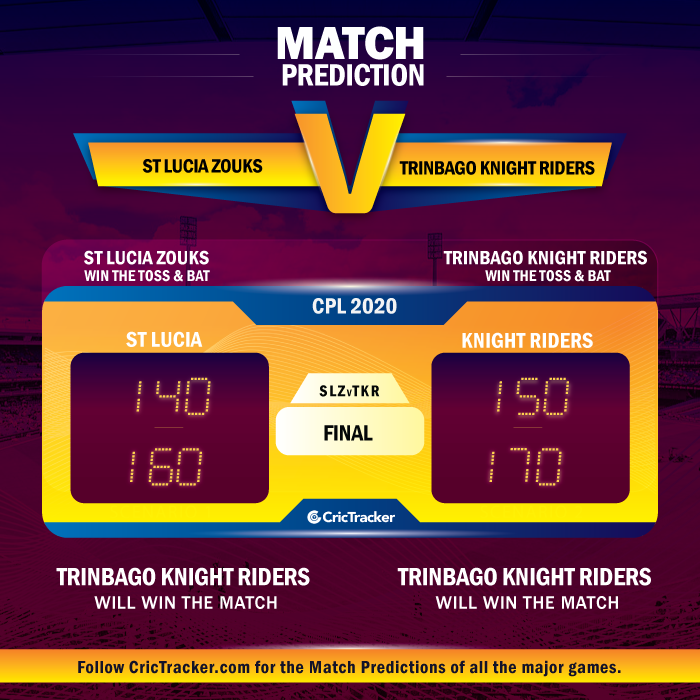