With their last victory, the Zouks have booked their ticket to the semifinals and they will look to continue their winning run, whereas the Warriors would want to be more consistent in their performances.

The Guyana Amazon Warriors will lock horns with the St Lucia Zouks in the 24th league match of CPL 2020 on 3rd September, at the Brian Lara Cricket Stadium in Trinidad.

St Lucia Zouks have had a fantastic season with a number of players performing and contributing in their wins. Having won 5 league stage encounters out the total 7 they have played thus far, they are located only behind the Trinbago Knight Riders in the points tally. In this match, the Zouks are coming after pulling off a mind-boggling heist against the Barbados Tridents.

The Darren Sammy-led side was rattled by their opponents as they failed to play their allotted quota of 20 overs and tumbled for a paltry 92 in 18 overs. Rising on the occasion, their bowling unit put on an inspiring show as they contained the Tridents for 89 for 7 to win the match by the barest of margins. The Zouks have played some great cricket over the passage of time in the league and their position in the table is a testament to that.

On the other hand, the Guyana Amazon Warriors have had start-stop affair and they have lost 4 and won as many in their 8 league face-offs hitherto. In their last match, Barbados Tridents were on the receiving end again as were wrapped up for merely 92 courtesy Naveen-ul-Haq’s stellar performance by bagging 4 wickets for 14 before Brandon King’s solid half-century led them to chase the necessary runs well before 20 overs.

With their last victory, Zouks have booked their ticket to the semifinals and they will look to continue their winning run, whereas the Warriors would want to be more consistent in their performances as the tournament is approaching towards its business end.

This being the second match of the day, the spinners will definitely be in action, however, with the forecast suggesting a strong probability of rain, the overcast conditions will also give fast bowlers a reason to smile. With expected interruptions, the teams will need to be wary of the DLS situation coming into play and the ideal choice will, therefore, be to chase.

The opening pair of Rahkeem Cornwall and Andre Fletcher will be on their duties again. The entire unit crumbled in the last game, let alone the openers, and therefore, both Cornwall and Fletcher would be keen to give the team some start this time. Leniko Boucher was amongst those who did stay at the crease for some time and he will come in at No. 3.

Roston Chase has had a good run with both bat and ball and he is expected to form the middle-order alongside Najibullah Zadran and the Zouks’ savior Mohammad Nabi. Though his team has been winning matches one by one, skipper Darren Sammy has not been able to contribute too much.

Brandon King looked good for his 51-run knock in what was an easy chase for the Warriors in the last game. The team management has tired a number of options from Anthony Bramble to Kevin Sinclair to Justin Greaves apart from Chandrapaul Hemraj in the opening slot, however, nothing has worked. Shimron Hetmyer is their best bet at No. 3 and he will continue being there.

Nicholas Pooran has got his form back after his century whereas Ross Taylor has also been making contributions in the middle-order apart from Keemo Paul. Skipper Chris Green might not have struck well with the bat, but with the ball, he has been phenomenal throughout the season. Imran Tahir has been in wickets as well and is expected to play. The pick of the bowlers in the last game was Naveen-ul-Haq, who bagged a 4-for in an extremely impressive spell. 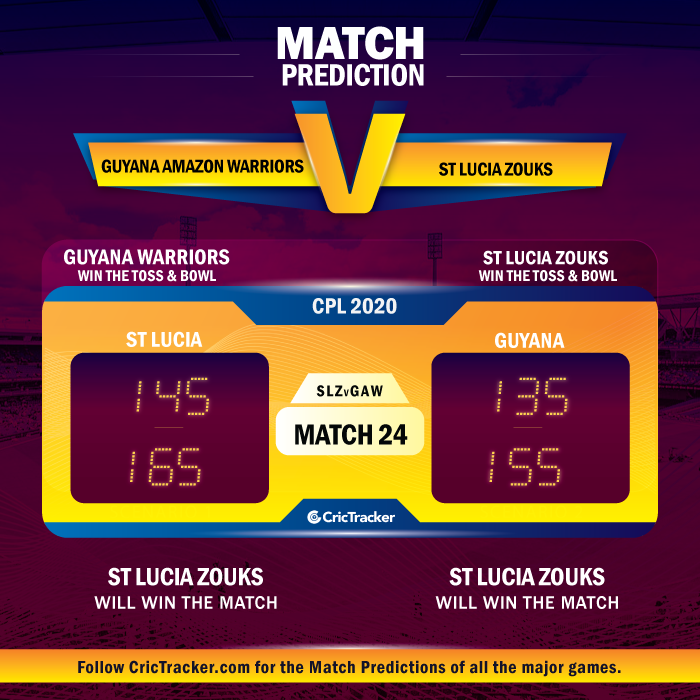 The prediction is for St Lucia Zouks to win the match.