The Tallawahs must be aware that they appear to be the weakest team in the top four and getting some momentum in the remaining two matches would only help.

The Jamaica Tallawahs will lock horns with the Barbados Tridents in the 28th match of the CPL 2020, on 5th September, at the Brian Lara Cricket Stadium in Trinidad.

The Tallawahs are placed at the 4th spot in the points tally with 3 wins and 4 losses, however, they have qualified for the next stage after the abandoned encounter against St Kitts and Nevis Patriots. Only 5.4 overs of play were completed when the rain interrupted play and the call for abandonment was made after steady rain continued and the officials were unable to attempt a resumption. The sharing of points meant that Tallawahs sailed through to the next stage automatically.

Their adversaries in this match, the defending champions Barbados Tridents have looked completely different from the last year. They have faced a massive 7 defeats in the 9 matches and have nothing substantial to show this year. Their scores of 89/7, 92 all out, and 89/9 in the last three games show their dire state of affairs and quite unsurprisingly, they are tottering at the 5th spot in the tally.

The 89 for 9, came against the Guyana Amazon Warriors in their previous league game. The Tridents looked clueless in front of Imran Tahir and Romario Shephard. The duo bagged 6 wickets for 34 runs in their 8 overs combined. Only a couple of days ago from this encounter, the Warriors had bundled them out for 92 as they chased it down in 16.4 overs with 8 wickets in hands. The story was not different apart from the fact that they were chasing 3 runs lesser. And they did in 13.5 overs with 6 wickets in hands.

The Barbados Tridents have nothing to lose and they will, at best, step out to play for pride. The Tallawahs, on the other hand, must be aware that they appear to be the weakest team in the top four, and getting some momentum in the remaining two matches would only help.

This being the second encounter of the day, the spinners will get even more assistance. The ideal choice would be to chase as the teams chasing during the second game of the day have ended up winning the most.

Opener Glenn Phillips has had a great time in the tournament and has scored runs with brilliant consistency. However, things have gone from bad to worse for Chadwick Walton. Nkumrah Bonner has been tried alongside Phillips as an opener and he has been lukewarm at that position.

Jermaine Blackwood and Asif Ali have made decent contributions in the middle, however, the latter has not clicked in the last few games. The other two mighty Caribbean- Andre Russell and Carlos Brathwaite- have been inconsistent, though the former has found his touch after a cold start. Brathwaite has been poor with the bat, but he has been bagging wickets without a halt.

Veerasammy Permaul has gotten some wickets under his belt to show and he is expected to play alongside the spin duo of Mujeeb ur Rahman and Sandeep Lamichchane, who both have not failed to perform thus far.

The list of issues for the Tridents is long, as none of their batsmen have been able to perform in the last three matches. Even earlier, the performances were more individual than of the entire team, but the last three games have been nightmarish outings for them. Johnson Charles was paired with Justin Greaves in the last game and that might continue.

Shamarh Brooks may get a look-in in place of Shai Hope, who has had a terrible season. Kyle Mayers has been one of the positives for them as he has performed with both bat and ball, however skipper Jason Holder has not been able to do so. He clicked well with the bat in the initial days but has lost his form ever since. Though with the ball, he has continued to shine.

Jonathan Carter and Ashley Nurse do not have much to show, however, they are expected to play. Rashid Khan and Mitchell Santner have been their star performers and have even mitigated the team’s humiliation by contributing with the bat in their low-scoring encounters. 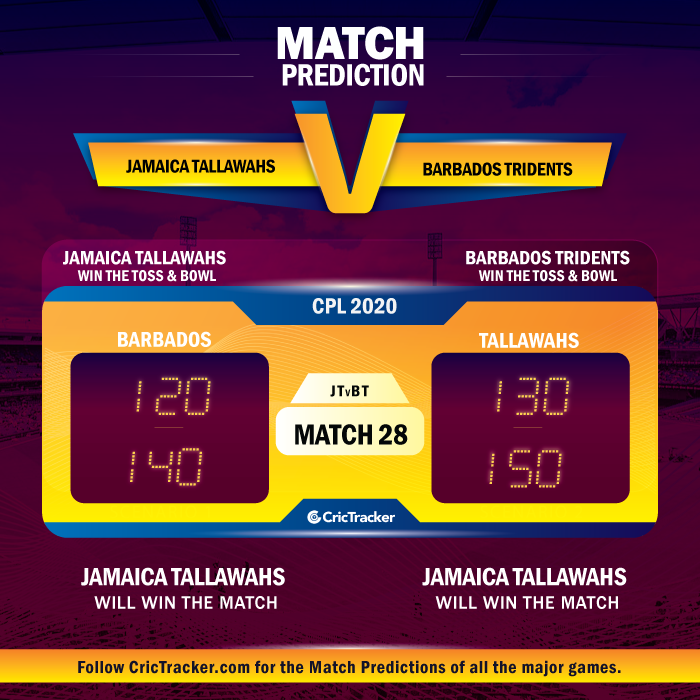