The last league match might not have any relevance with the perspective of the points tally, however, it is an extremely crucial match for both the teams who are a part of the next stage in terms of boosting their confidence.

The Jamaica Tallawahs will lock horns with St Lucia Zouks in the 30th match of the CPL 2020, on 6th September, at the Brian Lara Cricket Stadium in Trinidad. This is the last encounter of the league stage in this year’s edition before the teams move into the semifinals.

The Tallawahs locked their spot in the semifinals after sharing points with St Kitts and Nevis Patriots in a match abandoned due to rain. They will face the Trinbago Knight Riders in the semi-finals as their loss to the Barbados Tridents in their last game has fixed them at the fourth spot in the points tally. Rovman Powell’s men had put up a fighting total of 161 courtesy some brilliance of Jermaine Blackwood, who scored 74 off 59, and the Caribbean giant Andre Russell’s 28-ball 54 that included 5 maximums and 4 boundaries.

However, the bowlers were unable to leave an impression as the opponent skipper Jason Holder, Mitchell Santner, and Jonathon Carter’s effort led the Tridents to chase the total at the loss of three wickets and with 10 balls to spare. Though the Tallawahs have proceeded to the next level, they happen to be the weakest unit amongst the top four teams and would want to win today’s clash to have some winning momentum on their back.

On the other hand, the Zouks, who are set to face the Guyana Amazon Warriors in the semi-final clash, have had a mixed tournament thus far. They have won 5 games out of the 9 they have played and are seated at the third spot in the tally. In this match, they are coming after two successive losses, the last of which came against the team that has not been defeated by anyone, let alone the Zouks: Trinbago Knight Riders.

The young Mark Deyal, who opened the innings, and Andre Fletcher at No. 3 made healthy contributions in the chase of 176 against the Riders, however, they fell short by a considerable margin of 23 runs courtesy some wasted starts of the middle-order batsmen. The last league match might not have any relevance with the perspective of the points tally, however, it is an extremely crucial match for both the teams who are a part of the next stage in terms of boosting their confidence.

The second matches have been really weird in the last few days and have seen all sorts of happenings. The spinners are bound to get assistance given the slowness of the track and that 40 overs of the first match would have already been played by the time this match commences.

The opening duties will once again be in the hands of Glenn Phillips and Nkumrah Bonner as Chadwick Walton has been dropped after a terrible streak of scores. Phillips has had a brilliant tournament and has played multiple crucial knocks for his team. Jermaine Blackwood contributed substantially in the unsuccessful chase against Tridents and he would want to carry his form.

A big plus for the Tallawahs has been Andre Russell’s finding of form as he is a certain match-winner. Asif Ali, Rovman Powell, and Carlos Brathwaite will form a part of the middle-order for the Tallawahs whereas the spin twins Sandeep Lamichhane and Mujeeb-ur-Rahman will lead their spin department.

Oshane Thomas and debutant Preston McSween leaked runs aplenty in the last game and were extremely undisciplined in their line and lengths. Adding to the woes of their team, they gave too many freebies to their opponents.

My bowling idol and inspiration has always been Zaheer Khan: Arzan Nagwaswalla

The Zouks did a through shuffling in their batting order as Rahkeem Cornwall was replaced by Kimani Melius and Mark Deyal’s position was interchanged with that of opener Andre Fletcher. The strategy seems to have worked for Deyal and Fletcher as they both scored freely and stitched and important partnership for the second wicket.

Mohammad Nabi was sent in at No. 4 instead of Roston Chase whereas Najibullah Zadran’s position was fixed. However, the middle-order was unable to capitalize upon the start they got. Roston Chase, who was demoted to No. 7 in the last game, has been in good nick in the tournament and he would want to continue contributing the same way.  Kesrick Williams bore the brunt of his Keiron Pollard and was extremely expensive as he gave 50 runs in 4 overs. Scott Kuggeleijn bagged 2 wickets although he was expensive too.

The prediction is for Jamaica Tallawahs to win the match 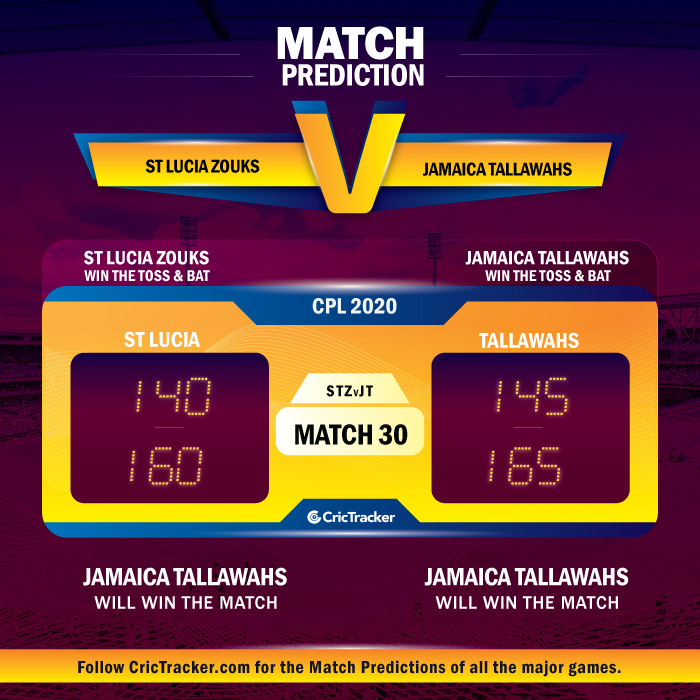