The Tridents need to sort out their issues at the top of their batting order.

The Barbados Tridents had a close shave in their opening match against St Kitts and Nevis Patriots, winning by six runs. They lost three wickets for eight runs to start the game, but managed to make a stunning comeback. The defending champions, captained by national Test skipper Jason Holder, will now be facing the Daren Sammy-led St Lucia Zouks at the Brian Lara Stadium in Tarouba.

The Zouks, on the other hand, started the T20 league with a defeat at the hands of Jamaica Tallawahs. Among all the six teams in the championship, the Zouks have the lowest win percentage and they will be desperate to make amends and turn their fortunes around. The Tridents and Zouks have locked horns in 14 matches with the former coming out trumps as many as 10 times.

The pitch at the venue has been a sporting one thus far. In all the games thus far, the opponents have had equal chances. Even as the spinners have gotten assistance, batters have also found their way to dominate. The conditions will be a tad on the cloudy side with the temperature around 29 degrees Celsius. The humidity will be around 75 per cent.

For the Zouks, Roston Chase was their standout batter, scoring a 42-ball 52 in their first game. Najibullah Zadran and Andre Fletcher got starts, but need to convert them. Mark Deyal threatened with a 6-ball 17 before perishing. Rahkeem Cornwall needs to find rhythm as well.

In the bowling department, Mohammad Nabi was decent with an economy of 6.50. Obed McCoy was hard to get away as well. But Scott Kuggelejin and Zahir Khan need to pull up their socks. Kesrick Williams was their standout bowler, picking up two crucial wickets.

The Tridents need to look into their top-order going forward. Johnson Charles, Shai Hope and Corey Hope are big names. The trio will be keen to find some sort of rhythm going ahead. Kyle Mayers was impressive, having scored a 20-ball 37. Skipper Holder is in excellent form both with bat and ball.

Rashid Khan may get a promotion after he notched 26 off 20 balls. In the bowling department, the Afghan tweaker and Mitchell Santner were economical and also picked up four wickets. Hayden Walsh Jr will be looking to get amongst the wickets as well. Reifer and Mayers were a bit expensive.

Live Streaming– The match can be streamed online at Hotstar. 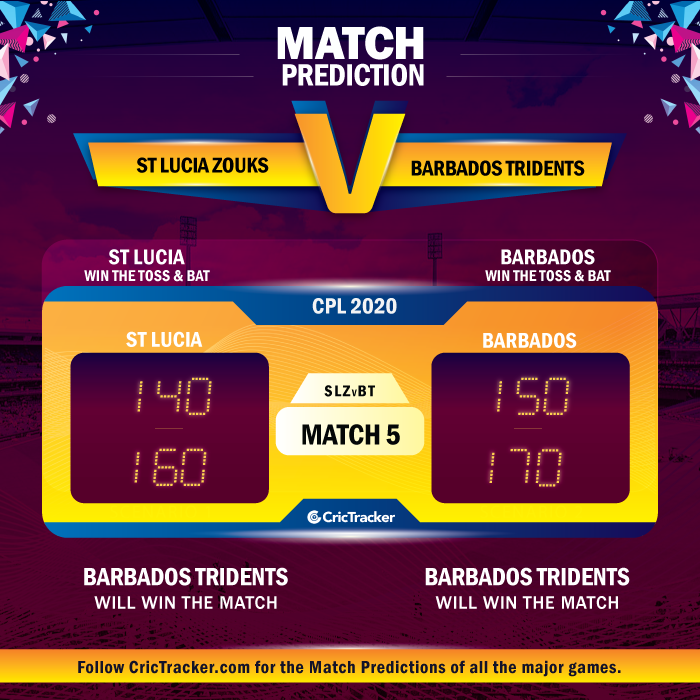