Andre Russell is a good captaincy pick for this match. 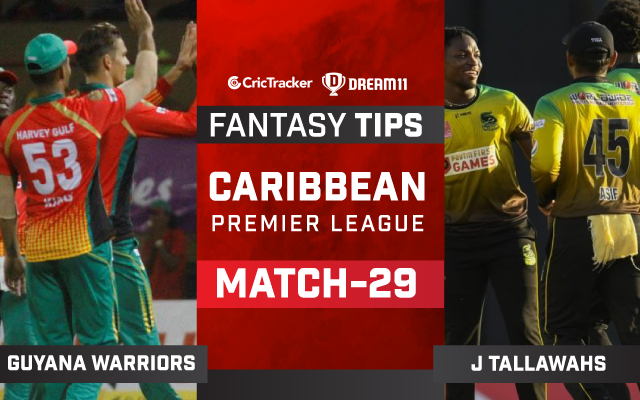 The Jamaica Tallawahs are currently occupying fifth place in the points table, having won 4 out of their 9 encounters. The last time both these teams faced each other, it was the Guyana Amazon Warriors who came out on top, beating the Tallawahs by 46 runs.

The pitch at the Warner Park Stadium will surely assist the spinners. Only batsmen who play out the initial deliveries that they face can score big on this kind of surface.

Shamarh Brooks has been in good form in the tournament with the willow in hand. The right-hander has scored 206 runs in CPL 2021 at an average of 34.33.

Rovman Powell has been in good touch with the bat for Jamaica Tallawahs. He has scored 165 runs and has also picked up 3 wickets.

Andre Russell has picked up 9 wickets in the tournament thus far and is the second-highest wicket-taker for the Jamaica Tallawahs side. Russell picked up 2 wickets in Jamaica’s previous match. Apart from that, he is one of the best strikers of the cricket ball and can send shivers down the spine of the opposition bowlers if he gets going.

Imad Wasim has picked up 6 wickets for Jamaica, maintaining an economy rate of under 7. He has also scored 88 runs.

Romario Shepherd is the third-highest wicket-taker in the tournament and has picked up 15 wickets in this competition at an average of just 12.86.

Migael Pretorius has had an excellent run with the ball in hand in CPL 2021. He has picked up 16 wickets in the competition and is currently the second-highest wicket-taker as well.

Nicholas Pooran led from the front in Guyana Amazon Warriors’ previous match and scored a match-winning 75* off just 39 deliveries to power his side to a crushing 46-run win. He has scored 228 runs in the tournament at an average of 38.00, and an incredible strike rate of 162.85.

Kennar Lewis has been in good form for the Jamaica Tallawahs side in the 2021 edition of the CPL. He is the fourth-highest run-scorer in the tournament and has scored 259 runs at a strike rate of close to 170.

Must Picks for GUY vs JAM Dream11 Fantasy Cricket

Shamarh Brooks has been amongst the runs in this tournament. He will be a risky pick in your fantasy teams as a risky captaincy choice.

Chris Green has produced poor performances with both bat and ball in this tournament and can be avoided from your fantasy teams.