Evin Lewis is a good captaincy pick for this match. 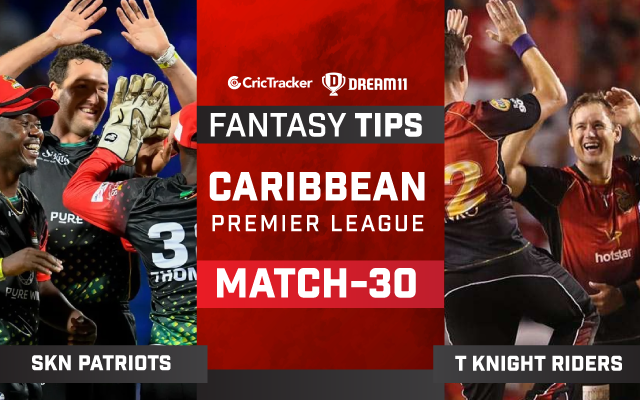 The 30th and final league stage match of the 2021 edition of the Caribbean Premier League (CPL) will see St Kitts and Nevis Patriots taking on the Trinbago Knight Riders side. Both these teams have been the standout sides of the tournament.

While the St Kitts and Nevis Patriots are placed at the top of the points table, having won 6 out of their 9 matches, the Trinbago Knight Riders are placed at the second place in the table and have won 5 out of their 9 games. When these two sides met last time, St Kitts and Nevis Patriots thrashed the Trinbago Knight Riders with 8 wickets to spare.

Evin Lewis pounded the Trinbago Knight Riders’ bowling attack to shreds and scored a classic 102* off just 52 deliveries to help his side wallop the opposition with 8 wickets to spare. Lewis is the highest run-scorer in CPL 2021 and has plundered 343 runs at an average of 42.87.

Kieron Pollard has been in good form in CPL 2021. The Trinbago Knight Riders’ skipper has scored 184 runs in the tournament so far and has scored them at an average of 36.80 and a strike rate of over 140.

Sunil Narine produced a good performance with both bat and ball in Trinbago Knight Riders’ previous match against the St. Kitts and Nevis Patriots. While he scored a quickfire 18-ball 33* with the bat, Narine also leaked just 10 runs in his 4 overs. He has taken 11 wickets in the tournament.

Dominic Drakes was the standout performer for the St. Kitts and Nevis Patriots in their match against the Trinbago Knight Riders. He picked up 3 wickets in the 4 overs that he bowled. Drakes is the highest wicket-taker for his side and has scalped 12 wickets in the tournament.

Akeal Hosein has prized out 11 willow wielders in CPL 2021 and has taken his wickets at an average of just 14.18.

Devon Thomas has been in decent form in the 2021 edition of the CPL. Thomas has scored 196 runs at an average of close to 25.

Must Picks for SKN vs TKR Dream11 Fantasy Cricket

Kieron Pollard has been in good form with the bat in CPL 2021 and can be a good risky captaincy choice for this match.

Ali Khan leaked 54 runs in the 3 overs that he bowled in the previous match, and can be avoided from your Fantasy side for this game.