The Royals are yet to open their account in the tournament.

Jamaica Tallawahs and Barbados Royals are set to cross swords in Match No.6 of the 2021 CPL on Saturday, August 28 at the Warner Park in St Kitts.  The Royals are in a bit of shambles, having lost both their opening matches against St Kitts and Nevis Patriots and the Trinbago Knight Riders.

They are placed fifth in the points table with a net run rate of -1.245. The Tallawahs, on the other hand, made a thunderous start to the league after they defeated St Lucia Kings by 120 runs on Friday. They put up the second-highest team total in the CPL on the board and raced to victory.

The pitch in St Kitts has been an excellent one for batting, especially under the lights. A fairly high-scoring match seems to be in store. Batting first should remain the way forward since chasing teams have found it tough to get going.

Glenn Phillips has been an effective batter in the CPL over the years. Moreover, having already played quite a few seasons for the Tallawahs, he would be aware of their bowling attack. In the first two games for the Royals, the right-hander could only manage 29 runs at an average of 14.50. But keeping in mind his talent, he is expected to fire next time.

Migael Pretorius bowled beautifully in the game against the Kings. He started by conceding 14 runs in his first three balls. But once he got rid of Rahkeem Cornwall, there was no stopping him. In the end, he picked up four crucial wickets and gave away only 32 runs in four overs. The speedster will again be looking to make an impact with the ball in hand in the next game. 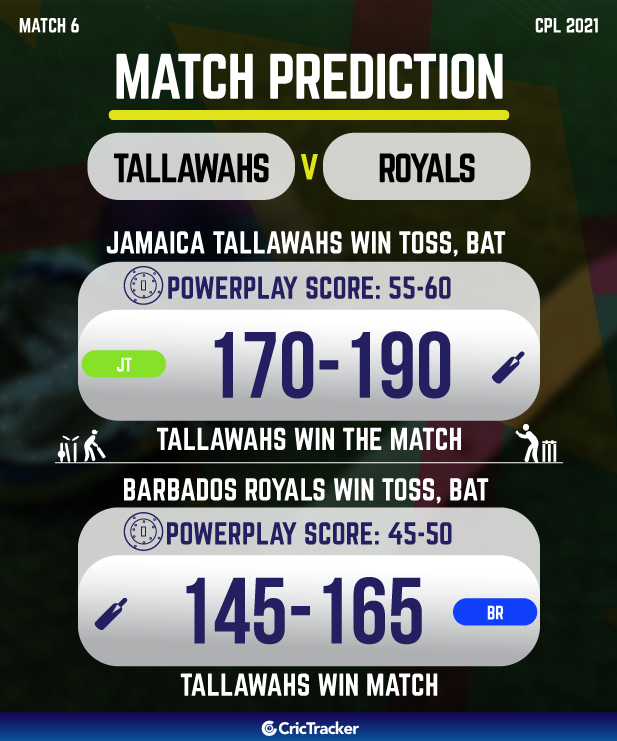