Roston Chase is a good captaincy pick for this match. 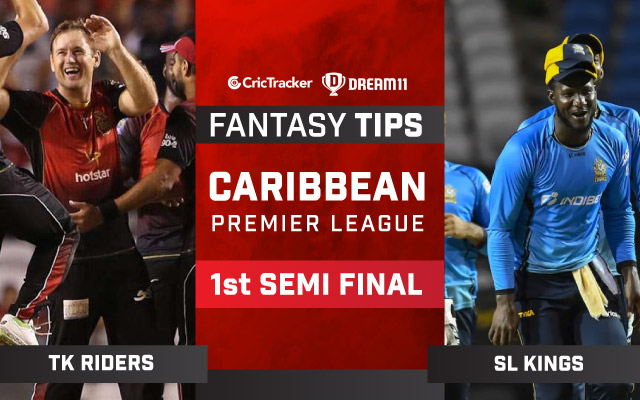 The first semi-final of Caribbean Premier League (CPL) 2021 will see Tringabo Knight Riders taking on Saint Lucia Kings. Both these teams have been the standout sides of the tournament and it would be interesting to see who emerges victoriously in the knock-out fixture. With six wins in 10 games, the Trinbago Knight Riders finished the group stage at the top position.

On the other hand, the Saint Lucia Kings won five of their 10 games and finished at the fourth spot. Notably, these two teams met in last year’s final and the Knight Riders walked away with a comfortable eight-wicket triumph in that match. Hence, the Kings will have redemption in mind and it would be interesting to see how this match pans out.

Colin Munro has been in fine form this season and Trinbago Knight Riders would want him to shine in the knock-out fixture. In 10 games, the southpaw has scored 239 runs so far.

Tim David has made a name for himself lately and expectations are high from him. He has scored 234 runs in CPL 2021 so far.

Kieron Pollard has been in good form in CPL 2021. The Trinbago Knight Riders’ skipper has scored 235 runs in the tournament so far at a strike rate of over 150.

Roston Chase has been in red-hot form and can possess a massive threat to the defending champions. The all-rounder has taken 9 wickets alongside scoring 367 runs.

Ravi Rampaul has prized out 18 willow wielders in CPL 2021 and has taken his wickets at an average of just 14.00.

Wahab Riaz will have the onus to rattle Trinbago Knight Riders’ batting line-up in the game. The left-arm pacer has taken seven wickets this season.

Andre Fletcher has been in decent form in the 2021 edition of the CPL. Fletcher has scored 214 runs at an average of close to 25.

Must Picks for TKR vs SLK Dream11 Fantasy Cricket

Rahkeem Cornwall can be a match-winner on his day. In the previous match, he played a crucial knock of 40 runs. Hence, he can be a good risky captaincy choice for this match.

Mark Deyal hasn’t been in good form lately and can be avoided from your fantasy side for this game.