Odean Smith is an excellent captaincy pick for this clash. 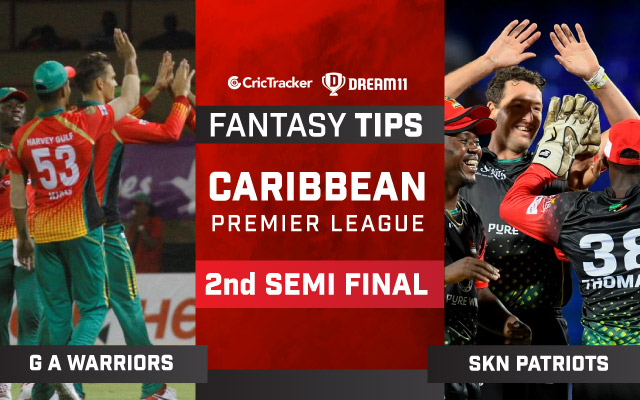 Guyana Amazon Warriors will lock horns with St Kitts and Nevis Patriots in the second semi-final of the Caribbean Premier League (CPL) 2021. The knock-out encounter takes place at the Warner Park in Basseterre, St Kitts on Wednesday (September 15). Both sides have had a similar campaign this season and it would be interesting to who emerges victoriously here.

Having won six of their 10 league stage games, the Warriors and Patriots finished second and third in the team standings respectively. Notably, these two sides locked horns twice in the group stages and the Patriots won both games. While the Dwayne Bravo-led side would like to extend their dominance, the Warriors will fight for a turnaround.

Evin Lewis pounded the Trinbago Knight Riders’ bowling attack recently and scored a classic 102* off just 52 deliveries. Overall, the southpaw has slammed 343 runs this season, with his strike rate touching 160.

Chandrapaul Hemraj has also been in fine form this season and expectations are sky-high from him. The dashing opener has scored 227 runs this season, including a match-winning century.

Odean Smith produced good performances with both bat and ball in this year’s CPL. While the right-arm pacer has taken 16 wickets this season, he has also scored 117 runs.

Dominic Drakes has been the standout bowler for St. Kitts and Nevis Patriots in this tournament. He has taken 13 wickets in seven games.

Romario Shepherd has prized out 11 willow wielders in CPL 2021 and has taken his wickets at a phenomenal average of just 12.44.

In the last few matches, Afghan pacer Naveen-ul-Haq has come to life. He has picked up 4 wickets in his last 3 games.

Nicholas Pooran has been in fine form in the 2021 edition of the CPL. Hence, the Warriors would be counting on him. Pooran has scored 237 runs at a brilliant strike rate of 161.22.

Must Picks for GUY vs SKN Dream11 Fantasy Cricket

Imran Tahir has taken 13 wickets this season and can be a good risky captaincy choice for this match.

Shoaib Malik has been far away from his prime this season. Hence, he can be avoided from your Fantasy side for this game.