Indian Premier League has been a platform for budding cricketers to showcase their skills against the best players from around the world. It has been fifteen editions since the T20 extravaganza kickstarted in 2008 and the tournament has seen many players from the Indian U19 teams fast-tracked to rubbing shoulders with the big boys to acing the international arena.

Be it Rishabh Pant, Ishan Kishan, Shubman Gill, Prithvi Shaw, or Ravi Bishnoi, the lucrative T20 tournament has been instrumental in their rise in world cricket. There are certain teenagers going around in the Indian circuit at the moment who has shown the potential to succeed at a higher level. With the IPL 2023 auction scheduled to be held on December 23, let us look at the Under-19 players who could fetch huge bids at the upcoming player auction. 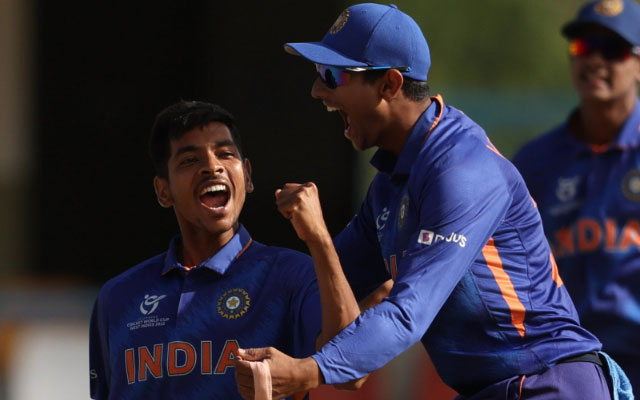 Ravi Kumar is a promising left-arm pacer in the Bengal cricketing circles. He rose to prominence in the Under-19 World Cup played earlier this year which saw him wreak havoc with the ball. He was India’s main strike force with the new ball and bagged a total of 10 wickets in six games at a superb economy of 3.66.

When India Under-19 locked horns with England Under-19 in the all-important final, Ravi was at his best. He struck twice in his opening spell to give Yash Dhull & co. an ideal start with the ball. Then at fag end of the innings, the ace pacer broke the 93-run stand between James Rew and Thomas Aspinwall sending both of them back into the hut. His impeccable four-wicket haul ensured that England are restricted to an under-par total of 189 runs.

The 19-year-old made his domestic debut in the recently culminated Syed Mushtaq Ali Trophy 2022 and caught a lot of eyeballs with his impressive showings. Ravi featured in three games and picked four wickets at an economy of 7.40.

The left-arm pacer brings variety to a team's bowling attack and thus, this skill set is always in demand in the IPL market. And given Ravi has been quite outstanding with the ball of late, many franchises might be interested in picking him at the auction.