Optus Stadium was rated Australia’s best venue for watching football when more than 48,000 football fans were surveyed by AFL.

ICC's marquee event, the 2022 T20 World Cup in Australia, has been a rousing success, with the knockout stages still to come. The highly anticipated fixtures are being played in seven different Australian cities across seven world-class venues. But one stadium that stands out among all those is Perth's Optus Stadium, which boasts a unique experience for viewers and fans alike.

Structured in 2017, the Optus stadium welcomed the public in the following year with hopes of delivering an experience like no other venue in the country. And so far it has delivered on the expectations with its bleeding edge technology and state-of-the-art infrastructure, making it an enthralling venue for the spectators.

Features of Magnificent Optus Stadium at a glance

If you haven't been to the venue in Burswood yet, I'm afraid I'm going to spoil the surprise for you: it is a spectacle. The 60,000 seater goliath boasts over 1,000 TV screens spread across the arena, strategically placed so that the fans never miss a second of the exciting action on display. The fans can also entertain the younglings as the stadium accommodates a children's activity zone as well. It would be sloppy to not mention the arena's LED lighting that woos the crowd with its ultra-immersive effects, especially during the night matches. 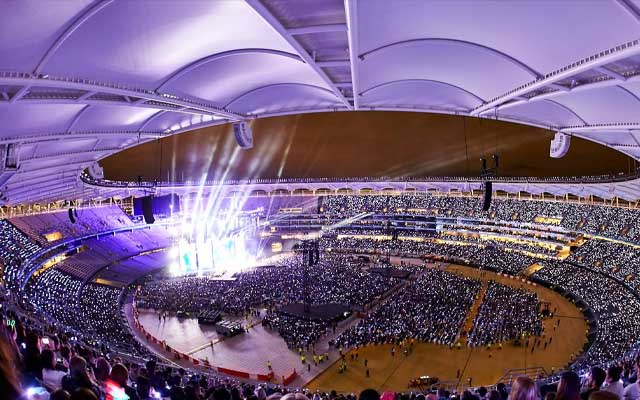 And if you need a break or some refreshments during the games, more than 50 food and beverage outlets will be at the service of the fans while they indulge in the action on the field. It might be hosting the mega ICC event at the moment, but the Optus Stadium has more to offer to the sporting community as it also accommodates AFL games and is home to the Fremantle Football Club and the West Coast Eagles. The venue has also welcomed a host of high-profile music acts, including Taylor Swift, Ed Sheeran, Eminem, and Guns N’ Roses, gathering a large number of crowds.

There are many different element to the Optus Stadium phenomenon, but how do the organizers keep such an integrated system afloat for the hectic games? Well, for starters, the holistic stadium lighting which produces a sumptuous experience for fans, comprises more than 22,000 controllable LED light fittings, which are managed through the Interact Sports lighting management software. The third-largest stadium in Australia, after the Melbourne Cricket Ground and Stadium Australia, Optus Stadium can also expand its wings for overwhelming crowds by adding up to 10,000 additional seats, if and when required. Giving an insight into the complex mechanism at work in the arena, there are around 700 cameras, including high-definition ones that enable the organizers to keep an eagle eye on the proceedings at the venue. The CCTV management solution is laced with facial recognition and database matching to provide an extra layer of security.

If the aforementioned features weren't inviting enough, leading telecommunication company Optus Pty Limited rolled out its cutting-edge 5G technology at Perth’s Optus Stadium in a bid to enhance connectivity with the spectators at the venue. The loyal Optus customers visiting the stadium with a compatible handset will benefit from the new 5G connectivity.

With more than 100 of these 5G sites in Western Australia, the technology was brought through to the stadium with support from the Government of Western Australia, stadium technology delivery partner Nokia and Venues Live. The spectators will be rewarded with faster download speeds and rapid video streaming services at the venue via Optus' network.

How many of you have lost your way inside the stadium or have trouble locating your seats? I certainly have on more than one occasion. But the Optus Stadium has extinguished that tribulation for the fans with another technological wonder. In addition to the superior network connectivity, Optus has also installed more than 1,200 Bluetooth beacons at the venue to enhance the experience of Optus Stadium App users.

Bluetooth connectivity helps spectators find their way inside the venue The Bluetooth connectivity will help spectators in finding their way inside the venue, an experience similar to the renowned Google Maps. It will also facilitate users in locating the amenities and refreshment outlets in the arena. Apart from offering the luxury of ordering food from your sets, the app also provides real-time data and analytics to stadium management, who can ensure customer satisfaction by tailoring their services according to the needs of the personnel.

Wait, before you trod off to your daily routine, the Optus Stadium in Perth also offers several amenities on non-event days. The Stadium park has year-round access to the general populace, who can cherish the BHP Boardwalk and Amphitheatre, the Chevron Parkland, children’s playgrounds, BBQ, and picnic areas.

Sporting events in themselves are more than capable of keeping the fans hooked, but the technological advancements on offer at the Optus Stadium enhance the experience of fans tenfold and make it an unmissable venue. If you do get an opportunity to visit this venue, grab it with both hands as it will be worth your time and some.